Another gem from the past has been unearthed as FnA Records are re-releasing Landslide‘s two first albums along with seven unreleased tracks on one record. 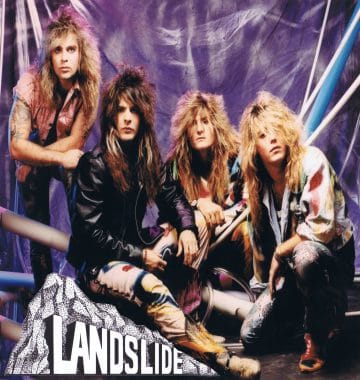 “In the late 80’s, Landslide became the number one drawing band in Denver, Colorado thanks to lots of radio airplay. The band formed in 1987 and immediately started releasing albums. The first album (in 1987) they released their self-titled, self produced album entitled “Landslide Is Hard Rock” on cassette and vinyl. And they sold well.

The band consisted of lead singer Str33k, guitarist Keith Quick, drummer Filthy Ritch, and bassist Haze, and due to their local success, they decided to set their sights on conquering the Hard Rock music capital of the world (Los Angeles). Landslide set up camp in East Los Angeles and soon were headlining and selling-out every major venue on the Sunset Strip (the Whisky A-Go-Go, Roxy Theatre, Gazzari’s, and the Troubadour). Momentum was carrying the band fast forward and interest in releasing a new album came in the form of UK label G.I. Records. The band quickly recorded and released “Bad Reputation”, quite possibly their strongest album. Rave reviews spread across the United States and Europe which brought about major label interest and the band was able to record seven more tracks to showcase to all the interested A&R guys. (the 7 tracks are included on this FnA Records release).

As success seemed right in the band’s grasp and they were in reach of that golden mountaintop; there was a literal “Landslide” within the band…and it all came tumbling down. To this day, the band will just tell you that they broke up in 1991 due to “personal reasons” and “irreconcilable differences.” There is no interest in tarnishing a bands reputation – especially that of a band that did more in four short years than most of their contemporaries and counterparts did in a decade chasing that “golden ticket”.

Landslide is so pleased, thanks to FnA Records, to have the seven never-before released songs finally heard, in conjunction with the bands two vinyl/cassette releases, “Landslide Is Hard Rock” and “Bad Reputation”.

Lead vocalist Str33k passed away and this CD is dedicated to the memory of our dear friend/brother, Str33k; May your music live on forever – you are dearly missed.

So pick up this career spanning 20 track album and see why the fans propelled the band to great heights.

The CD is a silver pressed replicated CD and the artwork is in-depth and colorful. The CD is available at www.FnARecords for $14.97.” 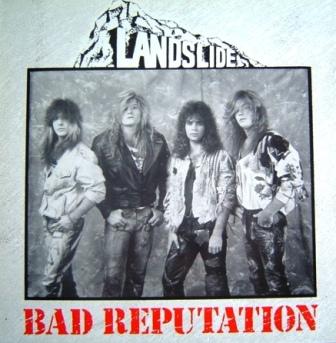