FnA Records has issued another blast from the past with the recent release of ’90s era Strip‘s debut full-length album Glad To Meet You…Sucker!. 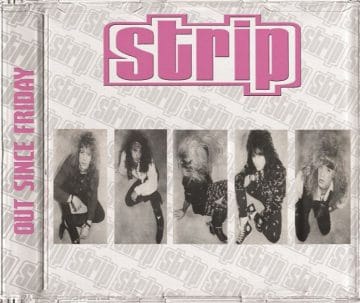 “Strip realizes a dream that has been a long-time in the making and its an understatement to say that they are excited!  Furthermore, longtime fans of the band have been chattering on social media causing glam/hard rock fans unfamiliar with Strip to take notice.  For those not familiar with the band, think of ‘Look What The Cat Dragged In’ era Poison, with a slight touch of Warrant mixed with the traits and characteristics of all the 80’s/90’s glam bands put into a blender.

Strip was named after the ‘Sunset Strip’ despite the common thought that it has to do with a hot, sexy woman taking off her clothes.  The band consisted of Jay “Paisley” Gumieny on lead vocals & acoustic guitar, Joel Ellington on guitars & vocals, Gary “Ferratti” Banach on guitars & vocals, Timmy “Turbo” Sett on bass & vocals, and Michael Jensen on drums and percussion.

Strip resided in Wisconsin but were seen more on the Chicago hard-rock scene playing such legendary clubs like the Thirsty Whale in River Grove, IL and The Metro and The Vic in the heart of Chicago.  When on native soil in Milwaukee, Strip would play T.A. Vern’s and even had a coveted show at Milwaukee’s Summerfest.

The band knew that a rock show was more than just the sound, it was a visual experience as well, and they looked every bit the rock band on and off the stage. Visually, there was a lot of hair, a lot of Hair spray, a lot of spandex, a lot of leather, and a lot of fringe.  When it came to writing songs, the goal was always the same – they wanted the audience to go home with a song stuck in their head!  From ballads like “Love Story” and “Forget Your Love” to rockers “Lullabye” and “It Doesn’t Matter”, the harmonies played as big a part as anything; and the band succeeded with this formula on their 2019 album, “Glad To Meet You…Sucker”.

“Glad To Meet You Sucker” is a bombastic 13 track album remastered from the bands two indie demo albums and a never before released track.