Three days ago, a heartbroken Casey Wood posted a Facebook message about his best friend Jill Janus passing away with some suggestion that the Huntress singer may have committed suicide. This prompted a media frenzy speculating that Janus may have passed away, which likely prompted the Huntress camp to later confirm Janus‘ death by suicide on August 14, 2018. 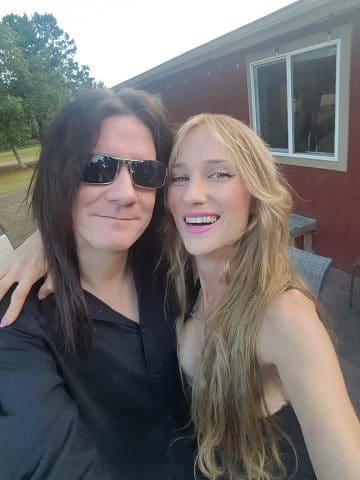 Sleaze Roxx reached out to Janus‘ former Vexy Strut bandmate (from 2003 to 2006) Casey Wood to find out more about Janus, how he met her and her last few days prior to her death.

Wood stated: “In 2003, a girl I was dating at the time informed me about a singer in Hollywood looking to form a band. I had been in and out of several bands being a drummer. So I contacted Jill via email and we decided to meet up. I drove from Portland, Oregon [USA] to Hollywood [California, USA] and we met at Barney’s Beanery. I walked in the door and knew immediately who she was. Her presence was obvious. People were all around her. She gave me a hug and we hit it off immediately. We went to The Viper Room on a Monday night where Steel Panther was playing back then. They were called Metal Shop. They pulled me on stage and I played the song “Sweet Child O’ Mine” on the drums. When I got off stage she hugged me and said you are hired! That was basically my audition for her

. The memories I have of her are endless and being in a band with her was the greatest time of my life. I always called her my sister that I never had. Vexy Strut faded away because she wanted to go in a different direction musically and I living 15 hours away didn’t help.

We always kept in contact and texted each other and always checked up on each other throughout the years. I loved the direction she went with her band Huntress and all of the guys were great to her especially, Blake, her man. I can’t say enough about how proud I am of her and her accomplishments. She texted me that she wanted to come hang out with me at my house and drove 16 hours to come see me. We spent four days together laughing, reminiscing and we even wrote an entire horror movie entitled Jill. She went to Portland an hour and a half away from my home to visit a friend of hers. She stayed two days there, then called me and said she did not like Portland and was coming back here.

She did comment about suicide and every time she did, I would change the subject and try to make her laugh. She was driving back here when she decided to take her life. She was only 26 miles away from my home when she did this. I am still in complete shock. I feel like she came here to say goodbye. I don’t know for sure but I am thankful that I got to spend her last days with her. There is way too many memories for me to talk about. Again, she was the sister I never had and I love her always. Rest in peace my sister Jill Janus.”