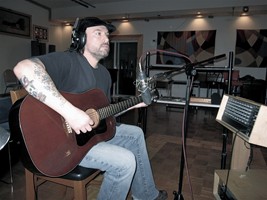 Dean Davidson has been working together with producer/engineer Phil Nicolo, with the former Britny Fox frontman starting his first song on March 13th for an album titled ‘Night Bird’.

Dean and Phil will be recording the album throughout the next two months. Dean is actually playing all the drum tracks on the album except for one song, “Tequila Hotel”, which was performed by Kenny Aronoff. Joining Dean, who handles lead vocals, acoustic guitars, piano, harmonica, drums and percussion, on ‘Night Bird’ is bassist Jim Miades. Also, Vanessa Winters from an upcoming Americana band The Lawsuits will be on backing harmony vocals, Andrew Jay Keenan is on Pedal Steel, and Dave Barlow handling piano and Hammond organ.

A music video is being filmed for the song and album title “Night Bird” — filmed by Matt Porter. Also, A short documentary on the making of the album ‘Night Bird’ with Dean Davidson, Phil Nicolo, Chris Schwartz, Kenny Aronoff, Vanessa Winters, Jim Miades, ect is also in the works. The single, video and ‘Night Bird’ music documentary will all be Available before the album’s 2012 release.

Visit www.facebook.com/officialdeandavidson and www.deandavidson.com for more information on Dean Davidson.