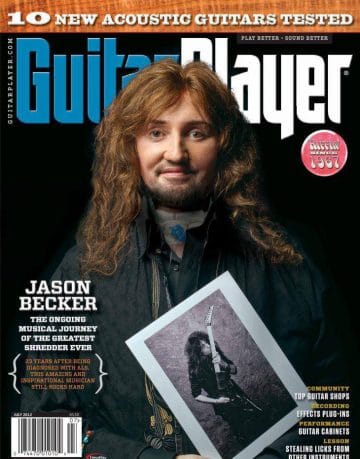 Few people exhibit more passion towards their craft than former David Lee Roth guitarist Jason Becker. Once a young guitar prodigy, Becker was afflicted with Amyotrophic lateral sclerosis (ALS) while in his late twenties in 1996 rendering him only able to communicate with his eyes. This has however not stopped Becker from composing and releasing music.

Wikipedia states the following about Becker:

“Jason Eli Becker (born July 22, 1969) is an American heavy metal guitarist and composer. At the age of 16, he became part of the Shrapnel Records-produced duo Cacophony with his friend Marty Friedman. They released the albums Speed Metal Symphony in 1987 and Go Off! in 1988. Cacophony broke up in 1989 and Becker began doing solo work, having released his first album Perpetual Burn in 1988, also through Shrapnel. He later joined David Lee Roth‘s band and recorded one album with him, A Little Ain’t Enough. Becker‘s performing career was cut short by Amyotrophic lateral sclerosis (ALS). In 1996, Becker lost the ability to speak, and he now communicates with his eyes via a system developed by his father. Despite his disability, he continues composing by using a computer and has since released with Shrapnel Collection, a “best of” album of his favorite songs and three new songs.”

Recently, musician Angel Vivaldi had the pleasure of meeting Becker and posted the following message on his Facebook account 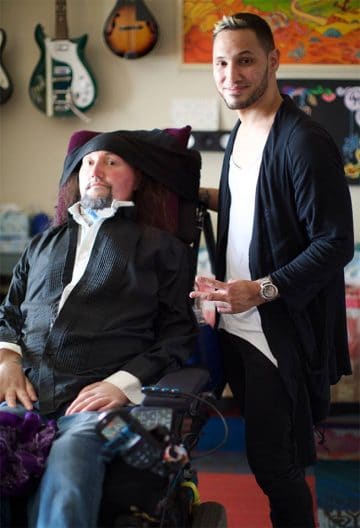 “Yesterday, I had the privilege of meeting the remarkable and inspiring energy that is Jason Becker. Hanging with him and his loved ones was such a highlight for myself both personally and professionally.

At first, I closed up in complete silence because frankly, I wasn’t sure if I could compose myself having been so closely affected by ALS. I’m never the one to publicly unburden myself through tears around those who are ill. For me, it’s always smiles, jokes and light-hearted laughter. It was a little rough for me to get to that point… at first.

It wasn’t long after my bout of silence when Jason asked if he could hear me play… so I mustered up an improv inspired by what I play for Rich every night on tour. I felt the emotional static in my chest slowly dissipate with each passing note and am grateful to have relinquished what I wanted to say to him through music.

The fact that nothing seems to stop Jason’s passion for composing regardless of his circumstance is unbelievably inspiring. He even shared some new material with us which was truly mesmerizing! Can’t wait for it to see the light of day.

Special thanks to his loved ones for giving us this incredible opportunity and many more to come!”