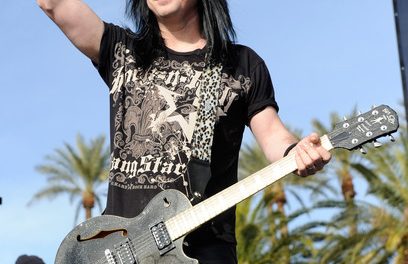 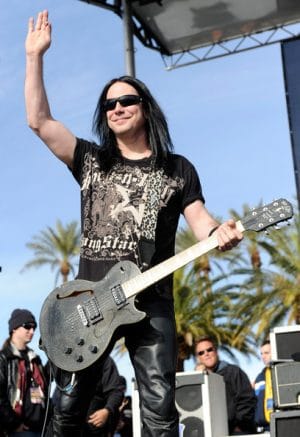 Ex-Faster Pussycat and Sin City Sinners guitarist Brent Muscat is back since in or about January 2016 with a new group called The Saints Of Las Vegas.

The four members of The Saints of Las Vegas are Brent Muscat, Rob Cournoyer, Brian D. Litton, and Anthony Serrano!

Brent and Rob have been well known on the Vegas scene for over ten years now, with a long list of credits and awards.

Brent is the co-founder of sleaze-rock legends Faster Pussycat. Faster Pussycat release three gold albums on Elektra Records. They toured the world with KISS, Motley Crue, Poison and David Lee Roth. They had a number one MTV video with “House of Pain.” He has also been a member of Bubble and LA Guns. Here in Vegas he and Rob formed one of the city’s biggest bands. Together, they helped raise nearly a million dollars for charity and won several “Best of Vegas” awards.

Rob is from Louisiana. He has been a member of Raging Slab. He is a graduate of the Berklee School of Music and teaches drumming to people across the world.

Brian D. Litton is a well known musician on the Vegas scene, who everyone loves for his style, amazing bass playing and his nickname, #slzyb. His former band, Kill Jaden, opened and headlined across Vegas and across the country.

The youngest Saint is Anthony Serrano. Even though he is the youngest Saint, he loves a variety of music from Hendrix to heavy metal. As a kid, Anthony‘s two main loves were the guitar and baseball. He was even scouted as a teen by several professional teams, but he chose the guitar. He’s been playing all over since.”