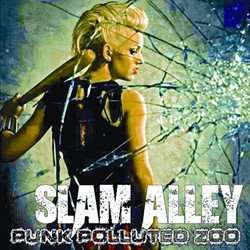 D.K. Revelle, who briefly replaced Mickey Finn as Jetboy singer in 2010, has teamed up with Demon Doll Records to release a collection of his Slam Alley material.

‘Punk Polluted Zoo’ contains every song Slam Alley has ever recorded, including the three never before released songs “Late Night Action”, “Hardtime” and “Kick In The Face” — as well as the original version of “Punk Polluted Zoo” and a straight acoustic guitar version of “For Heaven Sakes”.

The five original songs that were prviously released on the 2009 ’21 Fire’ EP — “Dogz Go Downtown”, “21 Fire”, “Punk Polluted Zoo”, “Cry For Freedom” and “For Heaven Sakes” — are also included and if you haven’t checked them out yet, prepare to have your mind blown.

‘Punk Polluted Zoo’ is a must have for any ’80s hard rock fan, and can be purchased and previewed at www.demondollrecords.com/products/slam-alley-punk-polluted-zoo.