Former King Lizard guitarist Niro Knox has formed a new group called KilliT who have released a video for their new song “See The End.”

King Lizard released two albums, Viva La Decadence (2010) and A Nightmare Livin’ The Dream (2012), which both were featured in Sleaze Roxx’s Top Ten Albums of the Year. 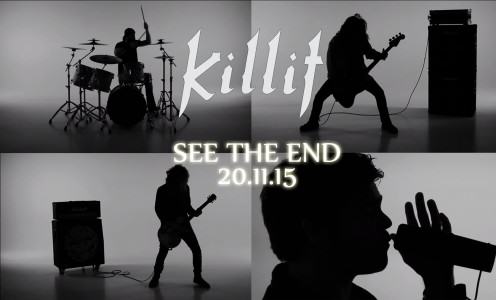 Viva La Decadence was ranked #4 and described as follows in Sleaze Roxx’s Top Ten Albums of 2010: “Time may have mellowed infamous swashbucklers such as Guns N’ Roses, but that is where this four-piece fits in — capturing the unbridled debauchery of classic albums from the late ’80s and blending it with the sneering sounds of today. If past superstars had the drive and desire of King Lizard the world of hard rock would be much better off.”

A Nightmare Livin’ The Dream was ranked #8 and described as follows in Sleaze Roxx’s Top 10 Albums of 2012: “One of my most anticipated albums of 2012 failed to disappoint as King Lizard came roaring back with another collection of Guns N’ Roses inspired sleaze. Several times during ‘A Nightmare Livin’ The Dream’ it feels as if the band is going to fly off the rails and implode, and it is that recklessness that makes these English bad boys fascinating. You never know what is coming next as they teeter on the edge of destruction with banshee wails, killer guitar riffs plucked from the sky and a heavy bottom end.”

Speaking exclusively to Sleaze Roxx, Knox commented about what happened to King Lizard: “Well, the last we spoke of the band was at Flash’s [former King Lizard singer] wedding four months ago. We said that if ever a golden opportunity would arise, we would gladly rock together again. Other than that, my heart was no longer in that band and these are the words that Flash used as well when we spoke about taking a break in December 2014.. So there you go… Other than that, we are all good friends and I still play with Moyano [former King Lizard drummer] in Guns 2 Roses gigs.

Knox said the following about the process of finding a new singer: “The process was very hard. I literally went to hell and back. I tried various singers in different countries. Lots were very good but it was very hard to find someone that would hit all the right criteria — not only to have the right voice and image but to be able to jump into the role, finish writing all the songs in time for the album release of February 2016 and deliver it all like a pro. Gaz Twist did exactly that!”

With respect to the idea for KilliT‘s new video for the song “See The End”, Knox stated: “The idea behind the video, especially since we are introducing a new singer in the band, was to have less glamour and a more raw performance. We wanted to present the band as it is currently and really put an emphasis on the band’s energy and drive. I personally always believed that there is nothing better than simply rocking out as hard as you can! In my vast experience with performing live, it’s always been the only thing that no one can argue with or dispute — if you rock, you rock!”

Finally, in terms of when we can expect a new album from KilliT, Knox advised: “The album will come out in February 2016. [I am] not sure of the exact date yet but its pretty much ready… It’s a full length 12 songs album full of masterpieces if you ask me! The people involved in the production of this album have a really good feeling about it too. The producer, Phil Kinman of MTR Studios, has done an incredibly amazing job capturing our sound. It’s amazing how this album sounds!”