Ex-L.A. Guns (guitarist Tracii Guns‘ version) lead vocalist Marty Casey has released a video for his single “Anything You Want” from his solo album The Ground You Walk On back on May 26, 2017.

Casey was recently interviewed by Bobby Caughron of XS Rock and was asked whether he had any outrageous stories from the road. Casey replied: “A fan was trailing our tour bus from one town to the next for like 4 hours.  When we finally pulled into a gas station to fill up, we stepped out and met this beautiful girl Jodie that knew every lyric to every song and just wanted to 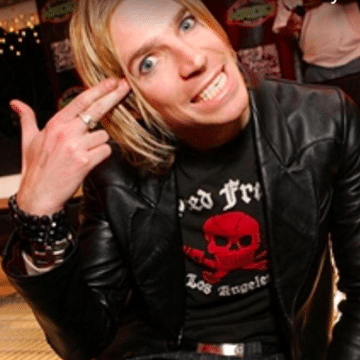 meet the band and say hello and that she believed in the band. She was at all of the shows that we had on the west coast. This was the first time that the band realized we had affected people outside of Chicago and really made an impression. We had been a big deal in Chicago for years but we felt it never expanded beyond the Midwest. When we met Jodie and her friends, we realized we were making more ground around the USA and beyond. To this day Jodie is a great friend of the band and still comes to our west coast shows and has even seen us in Chicago!!! It’s friends and fans like this that are such an awesome party of the Lovehammers journey.”

In terms of the strangest request that Casey has ever received from one of his fans, he advised: “I think one of the strangest requests was a girl asked me to sign her boob and she was then going to get my signature tattooed permanently there. I told her that I am not going to sign her boob because I think I am helping her make a solid life decision. So I signed her butt instead….”

In terms of whether Casey‘s friends and family are supportive of his choice to play in a rock band, the singer advised while mentioning L.A. Guns: “My friends and family are the only reason I have been able to keep the candle burning for all of these years. In the early years my parents not only helped me financially but they were also my biggest support system. They wanted to see me build my dreams beyond the unthinkable. They never once challenged my decisions (not even my decision to join LA Guns!). My father still hands out my DVD to nearly everyone he meets. He is proud of what the band and I have done and he shares that with the world. My brothers and sisters still come to my concerts and are my best friends. All of them have supported me throughout my life by letting me live with them, listening to me vent about the music business and also always being there for me. When you are the youngest of 6 children, you parents and brothers and sisters are your whole world. You think they are all the coolest and you want to be just like them. To this day, they are still my idols. I look up to all of them and try to follow in their footsteps because they understand the true meaning of life… Family!”

In terms of his favorite songs to play live, Casey opined: “From my new album it is “Anything You Want”. When we play it live it feels like a jangly, 70’s era Rolling Stones jam with a funky vibe in there. It just makes you move. From the Lovehammers catalog, it would be “Tunnel”. From the intro metal slide of the guitar into the thumping bass and the pounding drums, you get the feeling you are going on a roller coast ride. Every lyric in that song brings me back to the exact moment I wrote them and where my life was at that point. That song is a high definition snapshot of a young band living for the sole purpose of taking over the world.”

You can read the rest of the interview with Marty Casey at XS Rock.

Marty Casey‘s “Anything You Want” video: