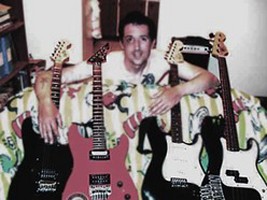 According to a CBC report, Nuttall, 38, and his girlfriend Amanda Marie Korody, believed to be about 30, both of Surrey, B.C., have each been charged with conspiracy to commit an indictable offence, knowingly facilitating a terrorist activity and possession of an explosive substance. They both made a brief court appearance in Surrey, B.C., today, after they were arrested Monday. The pair are accused of building explosive devices with the “purpose of causing death or serious bodily injuries,” which were placed outside the B.C. legislature in Victoria on Canada Day.

RCMP said the contents of the improvised explosive devices included nuts, bolts, nails, washers and other materials intended to kill or maim people. Police said Korody and Nuttall, both Canadian-born citizens, were “inspired by al-Qaeda ideology,” but added the incident represented a “domestic threat without international linkages.”

Nuttall once played guitar in the B.C. based hard rock band Lust Boys. Frontman Tommy Thrust tells Sleaze Roxx that Nuttall “was in the band briefly for one month, five years ago, while we where auditioning new lead guitarists. Luckily we found Benny (Blitz) and asked Johnny to leave. The guy was kinda off his rocker. He was a bit odd but I couldn’t see him being capable of something like this.” Nuttall did have previous run-ins with the law however, in 2002 he pleaded guilty to a robbery charge in Victoria and was sentenced to an 18-month conditional sentence.

Thrust recalls one night of drinking with Nuttall where the musician “stepped outside for a smoke and suddenly jumped into traffic. He stood in front of a moving car until it stopped and then started to hit the hood of the car with his fists. The couple inside the car were too shocked to move until I tackled him off the road.”

Lawyer Tom Morino said Nuttall is a convert to Islam, but Thrust doesn’t remember his former bandmate being very religious. “He was more into politics… well, least what he understood of them. He’s not the sharpest tool in the shed.”

Nuttall, who co-wrote the music to the Lust Boy’s “Moment Of Madness”, maintained a ReverbNation page that included low budget demos with titles such as “In The End”, “In League With Satan” and “The End Of The World”.

The Lust Boys released their debut album ‘Tall Glasses And Short Skirts’ in 2012 through Absolute Underground Records, but have since revamped their line-up. With the departure of singer Jayme Black and guitarist Brian C, Thrust has taken over lead vocal duties and reverted from bass to guitar. Newest member Derek D, on bass, rounds out the band with Blitz and drummer Stefano Sxdryv. The band recently relaunched their website at www.lustboysofficial.com.