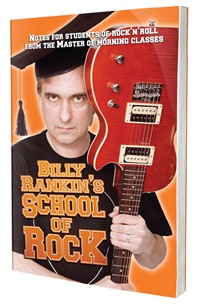 Former Nazareth guitarist Billy Rankin spent the last five years entertaining Rock Radio listeners with his School Of Rock feature every weekday morning on the cult station. During over 4000 hours of live broadcasting he shared tales of wine, women and song starring big names like Ozzy Osbourne, Guns n’ Roses, Iron Maiden, Aerosmith, Metallica, Status Quo, Ted Nugent, the Who, REM, the Beatles and many others.

With the end of Rock Radio on Friday came the end of Billy’s broadcasting stint. But he’s decided to leave his listeners with a written memento of his audio lessons, in the shape of his book, ‘Billy Rankin’s School of Rock’, stuffed with hundreds of his favourite anecdotes. The foreword is written by award-winning Scottish rock broadcasting legend Tom Russell. The book includes such stories as Axl Rose’s nuptial no-show, Ozzy Osbourne’s night movement, John Lennon’s bedside blag, Angry Anderson’s admission, Noddy Holder’s naughty eyeful and Ted Nugent’s legalised theft.

The title will be published on Thursday, November 10, 2011 at an event in Glasgow’s Solid Rock Cafe, but the book can be pre-ordered via www.billyrankin.com for the discount price of £7.50, including a dedication and autography from Billy.

Billy Rankin was a member of Nazareth from 1980 to 1983 then again from 1990 to 1994. Before finding fame with the Fife rock heroes he played with the Sensational Alex Harvey Band and went on to a successful solo career. He worked and/or drank with many of the stars of his book and became the host of cult station Rock Radio’s breakfast show from its launch in 2007 until its “rebrand” this week.

Below are some excerpts from the book ‘Billy Rankin’s School of Rock’:

Voice of concern
The marriage of Axl Rose and Erin Everly took place at the Cupid’s Wedding Chapel in Las Vegas on April 28, 1990… but it didn’t start out all that auspiciously.

Erin later told how, the day before, Axl had showed up at her LA apartment at 4 in the morning, saying he had a gun in his car. If she didn’t agree to marrying him, he’d shoot himself dead, was basically how it was put.

That’s not to say he’d never done anything romantic. He’d written Sweet Child o’ Mine for her. And he’d told her how her dad Don, one half of the Everly Brothers, had sung one of his favourite songs of all time.

On the long drive to Vegas he promised he’d never leave her; and by the time they got to the tiny chapel on the strip she believed him. Axl wanted everything to be perfect for the ceremony, of course. So he tried to get his favourite singer to perform his favourite 1960s song.

But 18 Calls from 18 Guns n’Roses associates failed to make it happen. The singer in question had so little faith in the couple’s future, he reckoned the four-minute song would outlast the marriage.

The couple filed for divorce 27 days later – which kind of proved Nazareth’s Dan McCafferty right for refusing to sing Love Hurts at the wedding.

Shit in the dark
Once when Nazareth played in Little Rock, Arkansas, Ozzy and Sharon Osbourne were staying at our hotel, and came down to our concert.

Ozzy was meant to be on the wagon at the time, so Sharon wasn’t too happy when she caught him in our dressing room taking a swig of out of a Jack Daniels bottle. After a serious rammy, she stormed off back to the hotel.

Ozzy came back with us after the gig then went off to bed. Next morning at breakfast, he came down alone.

‘She’s gone, replied Ozzy. ‘But she was in bed when I got back last night’.

‘So how to you know she’s gone?’ we wanted to know.

‘Bit of a no-brainer really,’ he said. ‘There’s a massive great shit in my suitcase…’

Imagine there’s no ashtray
I have an embarrassing secret to share about the time I was recording in John Lennon’s Mansion Studio and I’d just met Def Leppard drummer Rick Allen (and told him to change his band’s name because it would never catch on).

After playing pool in Lennon’s games room, we decided to explore the rest ofthe ex-Beatle’s house. It was out of bounds – but you know what it’s like whenyou’re drunk.

We went into John and Yoko’s bedroom and found the en-suite had a gold lavvy seat and a neat wee socket to plug your guitar in while you – well, yeah…

Their headboard was black marble with their names engraved at each side, and two white marble ashtrays set into it, one for each of them.

I told Rick to keep watch while i used my keyring to prise John’s well-used ashtray out of its cubby hole and stuffed into my pocket. Yes, I stole John Lennon’s ashtray. I’ve still got it but I couldn’t sell it on eBay because I might get arrested.

It’s probably best if I never tell anyone — d’oh…

By name, not by nature
Long before he sang the wedding theme for Aussie soap Neighbours, Angry Anderson was the frontman of hard rock band Rose Tattoo.

They supported Nazareth in toronto in 1982, and Angry asked me to introduce him to our singer Dan McCafferty, who’d been a big influence. I took him into our dressing room and he very politely introduced himself thus: ‘Allo Dan – I’m Angry.’

Dan looked all concerned and replied: ‘What aboot, son?’

Look wot you saw
Doing German TV shows can be a boring experience.

There’s a lot of hanging around while the cameras are set up, and it usually takes two days before it all goes out live. Tedious stuff.

Unless you’ve got Noddy Holder with you.

Nazareth caught a flight with Slade and the moment’s top pop band, the Thompson Twins, for a telly show in Munich.

The lead Thompson spent the whole flight having his hair lacquered while Noddy and I spent it flicking peanuts into the back of his head.

Once at the studios, we were all allocated caravans to get changed in, and Noddy soon appearing at his window, stuffing Dave Hill’s wig down his underpants. No, Dave didn’t know; and yes, he wore it later.

After the broadcast, Mr Holder joined us for a drink in our caravan. From his point of view he could see into the pop caravan and was able to watch the girl from the Thompson Twins getting changed.

Gunning for me
When I was starting out in the Glasgow pubs my wee band Phase were always adding songs to our set-list at someone else’s expense. We’d play Montrose, Be-Bop Deluxe, Lone Star and so on. Our audience thought the ditties were our own and we were wise to it.

For more than a year we’d been playing tracks from a certain American’s debut album. So when we heard he was in town, me and the band had to go to see him at the Apollo. Even though he was only supporting Black Oak Arkansas – who were, as we all know, crap.

On the night of the gig we’d just got fish suppers from the Y-Bird when up came a Ford Granada with a big-haired guy hanging out it yelling, ‘Hey! You guys know where the stage door is at?’

We yelled back: ‘Bloody hell, it’s you!’

The guy with the big hair was astounded anyone in Glasgow knew who he was. And when we confessed to passing his songs off as our own he just laughed.

‘I should kick your butts guys, but i admire your balls,’ he said. I asked for his autograph and it hung on the Rock Radio studio wall from the day I started until the day I finished.