Ex-Riot guitarists Lou Kouvaris and Rick Ventura were recently interviewed by Kenny Kessel for Canada’s The Metal Voice. Kouvaris played rhythm guitar in Riot from 1976 to 1978 and played on the band’s debut album Rock City (1977). 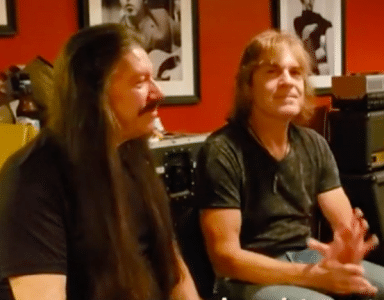 In terms of how the new band Riot Act formed, Ventura advised (with slight edits): “It came about from Riot V guitarist Mike Flyntz invited me to perform with Riot V as a guest at B.B. Kings Club and I got to play ‘Swords And Tequila’ and ‘Warrior’ on stage after so many years and it just escalated from there. Then Lou was invited to perform with Riot V in Japan. So our performances lit a fire under our butts.”

Kouvaris added: “I went to Japan in 2015 with Riot V as special guest. I did a little tour with them. Riot V was very gracious and the rest is history. I did ask Rick to do this in 2011 but he was busy doing something else but it took the Riot V people to ignite us.”

You can read other excerpts from the interview with Lou Kouvaris and Rick Ventura at The Metal Voice‘s website or listen to the interview below: