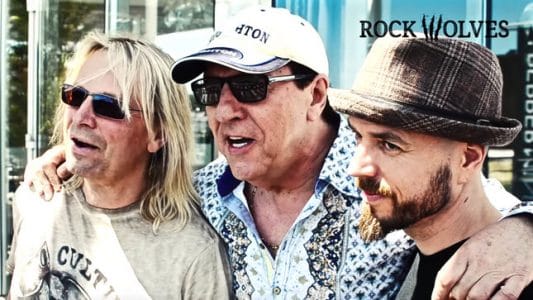 “Rumors were flying thick and fast for a while, but now it’s official: Steamhammer/SPV have signed the new all-star trio Rock Wolves for the world ex Japan. The name stands for Herman Rarebell, Michael Voss and Stephan “Gudze” Hinz, three of the most renowned German rock musicians of the past forty years. Their CVs feature eminent acts such as the Scorpions, MSG, H-Blockx, Casanova and Mad Max. Their first single “Rock For The Nations” is due out on September 9th, to be followed by the debut album on October 28th. Drummer Herman Rarebell describes his new band’s material as “classic rock music, powerful but not too heavy”. 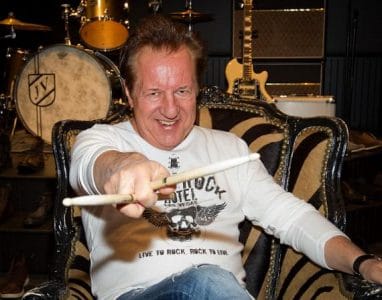 As the former Scorpions‘ drummer, Herman Rarebell was instrumental in recording classics such as Lovedrive, Blackout and Crazy World between 1977 and 1996, and looks back at a successful stint as the manager of his own recording company Monaco Records. At the moment, he is a member of guitar legend Michael Schenker‘s current group Temple Of Rock, where Rarebell met Michael Voss, among others. Since the 1980s, Voss has caused a stir with acts such as Mad Max and Casanova, has worked with Michael Schenker and is also involved in Temple Of Rock as a vocalist, songwriter and producer. The third Rock Wolves member is Stephan “Gudze” Hinz, founder member and bassist of H-Blockx and hence a representative of the 1990s rock generation. So here we have three illustrious names, three decades, and three artistic careers with similar but by no means congruent influences.

The material of the upcoming Rock Wolves album was produced by Michael Voss at Münster’s Kidroom Studio and at the Principal Studios in Senden. Twelve songs, among them a cover version of American hit writer Jim Vallance’s “What About Love”, which was a Billboard Charts topper for American band Heart in 1983. A video to support the lead single “Rock For The Nations” was shot near Hanover in mid-June and will also be released on September 9th.”