Ex-Shokker powerhouse singer Rachl “Raxx” Quinn has resurfaced in the reformed symphonic metal group Graveshadow. Quinn was in Shokker from late 2014 to mid-2018 and handled lead vocals on the EP Shokker (2015) and the full-length album III (2017). Graveshadow have just released today their first single with Quinn on lead vocals. 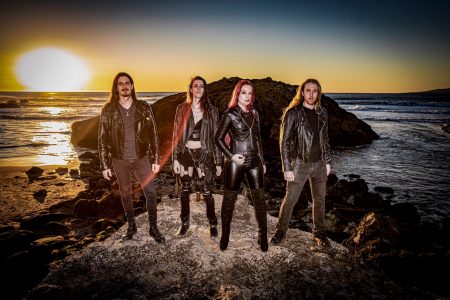 In terms of Quinn‘s voice, Sleaze Roxx stated in its review of III: “What a voice! If you had to name your top five all-time female vocalists and you had heard Shokker‘s entire III album, you’d be hard pressed not to include Quinn among your top five, if not the top spot.”

The following message was posted in part on Salem Rose Music & M-Theory Audio‘s Facebook page back on May 13, 2020 (with slight edits):

“The symphonic/gothic metal group Graveshadow will begin an exciting new chapter on May 29, when the Sacramento, California-based quintet releases a new single, “Gwynnbleidd.” In addition to being the first new music from the band – who have toured alongside the likes of #Sirenia, #Tarja and #Angra – since their acclaimed 2018 M-Theory Audio debut “Ambition’s Price,” the song marks the debut of two new members: vocalist Rachl Quinn and bassist Luci Rae.

According to founding guitarist William Lloyd Walker, the new additions to Graveshadow have reinvigorated the group. “I can’t explain how elated and overjoyed I am that this has all come together,” he says. “At the end of 2018, I sincerely thought Graveshadow was over. Aaron (Robitsch, guitars/keyboards) and I were writing for a new project, but when we heard Rachl‘s audition tapes, there was no question that Graveshadow had a chance to come back stronger than ever. The additions have opened up new frontiers in writing, and the whole group just works together so well. This is a huge shake-up, a whole new lineup. While I know many of our fans may be raising some eyebrows right now, I feel confident that this lineup is going to deliver material that is going to kick us up to the next level. Thank you all for your continued support, and stay tuned – this is just the beginning of the next chapter in Graveshadow history!” 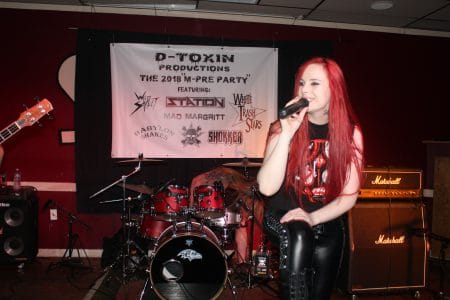 Adds Aaron Robitsch, “Words cannot describe my excitement for what this lineup has in store! A year ago, I seriously thought this band was done for and was deeply saddened that all we had accomplished had come to a sudden end. I have to give a huge shout-out to my friend Avi Cohen for recommending Rachl, as her voice inspired Will and me to continue. Having Luci not only providing bass, but also growls allows us to present a new dynamic of vocal layers that we couldn’t accomplish with a single vocalist. I will cherish the memories shared with the ‘Ambition’s Price’ lineup, but I’m confident that new team is worthy of the Graveshadow name!”

“Gwynnbleidd” will further showcase the potential displayed on their 2015 debut “Nocturnal Resurrection” and “Ambition’s Price,” both of which saw the group deftly mix symphonic and gothic metal with elements of doom, thrash and epic progressive power metal.

Since forming in 2013, Graveshadow have earned extensive praise for mixing fantasy-based lyrics with crushing guitars, beautiful keyboard melodies, thundering bass, earth-shattering drums and powerful vocals that range from operatic highs to unearthly growls, creating a rich and dynamic musical atmosphere that is ripe for storytelling. In addition to the aforementioned artists, the group has built a steady following in the Western United States in recent years through regional tours and performances alongside the likes of #Arkona, #ChildrenofBodom, #Apocalyptica, Marty Friedman, Death Angel, Flotsam and Jetsam and #Anvil.

“Gwynnbleidd” will be available on Spotify, Apple Music, Bandcamp and other digital platforms on May 29.”