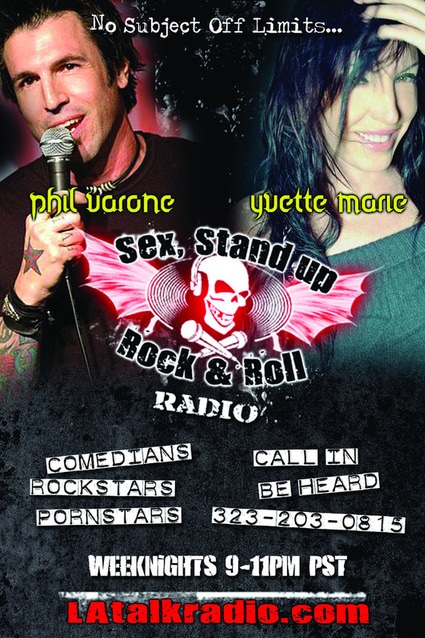 Sex Stand Up Rock and Roll Radio, hosted by Phil Varone and Yvette Marie is unique as it covers all aspects of the business in an entertaining way. With comedians, rock stars, adult stars and celebrity guests, there is no subject off limit. Along with studio guests, our listeners become part of the show as we take their calls and welcome their insight on each subject. Listeners also have chances to win great prizes from the show sponsors. Prizes range from clothing, DVDs, music CDs, adult movies, adult toys and much more. Tune in and tighten your seat belt for an entertaining ride!

Host Phil Varone is an accomplished drummer, music producer and songwriter best known for his work with the bands Saigon Kick and Skid Row.

After leaving the music business in 2004, Phil moved to Los Angeles to pursue a new career in acting and stand up comedy. Shortly after arriving in L.A, Phil created the Sex Stand Up and Rock and Roll show. Phil is joined by his beautiful co host Yvette Marie. Yvette , an accomplished artist, photographer and model who has been featured in numerous publications throughout the world.