Ex-Slash Puppet frontman Mif was recently interviewed by A.V.A. Live Radio and provided some insight on how and when the six songs that comprise his new project My Insane Friends came about.

The following are excerpts from the interview conducted by A.V.A. Live Radio (with slight edits): 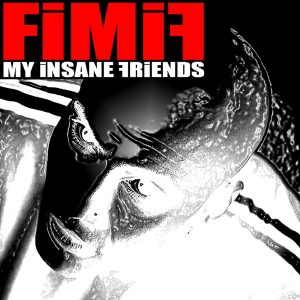 In early 1995 after another successful tour
with my highly celebrated Canadian band Slash Puppet and after much deliberation, I decided to leave the band to pursue other interests. In the midst of the huge musical shift known as grunge, and after several conversations with David Bendeth (BMG Records Canada), I began to explore deeper meanings to my own personal condition and to that of the world around me. Sensing an obvious musical climate change and desiring something a little more progressive musically I set out to solicit the help of some of the finest musicians on the Toronto scene at the time and partnered up with Michel Scotta-Delorme (Guitar), Lionel Tissot (Bass) and Rick Smith (Drums). These 6 songs on the debut EP were the first to be spawned and recorded. Darker, heavier, full of angst, raw, aware and unrepentant they are now just being released for the first time in the form of My Insane Friends.

The one thing that left the worst taste in my mouth
came around the time of the “Grunge Invasion” to which I alluded earlier. This was the sole reason why I had had enough and sent myself into exile from the musical scene that I once dominated with my band Slash Puppet. In and around 1991 Slash Puppet was signed by SRO Management (Rush, Van Halen, Queensryche, Kings X) to a management and production deal. It took some very hard work to make our way up to this level, including many lessons learned from all of the inevitable hurdles and pitfalls any band must endure, only to have it come to a total and crashing end due to a musical style shift that enveloped the mainstream music scene, and that we had absolutely no control of or any real way of coming back from, not even with a new stellar band and these 6 songs in 1995! Timing is everything, for better or for worst!

You can read the rest of the interview at A.V.A. Live Radio.

My Insane Friends‘ “Born Inside The Shell” video: