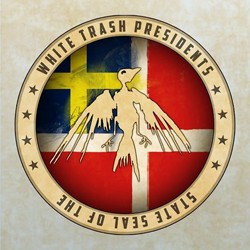 In August the Denmark based StarRats announced that they were disbanding after three full-length studio albums. Now vocalist Magnus MP Moller and guitarist Dennis Post have teamed up with former Crazy Lixx bassist Loke Rivano and drummer Brion Wekin to form the White Trash Presidents.

The White Trash Presidents’s first single, “One Fuse Left”, will be released no later than November 1st with a self-titled debut album slated for later this year.

When asked why the StarRats decided to call it a day, Moller stated, “the thrill is simply gone, and when that goes the chemistry goes with it.”

With the common love of solid, well written, well played, good old fashioned rock ‘n’ roll, the White Trash Presidents have found a rock sound that is quite unique, even for Scandinavian standards. You can clearly hear where the band members hail from, as well as the influences of bands like Guns ‘N Roses, Social Distortion, Motley Crue, Velvet Revolver and Backyard Babies to name a few.

The StarRats gained a cult following through the albums ‘Broken Halo’, ‘Rebelution’ and ‘Screw The Consequences’. Loke Rivano meanwhile made a name for himself on the well regarded Crazy Lixx albums ‘Loud Minority’, ‘New Religion’ and ‘Riot Avenue’ before leaving the band in early 2012.