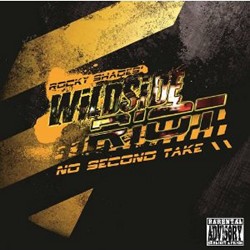 Wildside Riot are a new five piece melodic sleaze band based in the Midlands who combine a heavy edge to instantly infectious songs. They are fronted by the ‘Godfather of Glam’, the one and only Rocky Shades. Shades is the former frontman of the ‘Titans of Trash’ — Wrathchild UK — having released albums such as ‘Stakk Attakk’, ‘The Biz Suxx’ and ‘Delirium’. Wrathchild were one of the forerunners of the New Wave of British Heavy Metal and many of today’s leading glam/trash/sleaze bands admit to being heavily influences by the band’s imagery and music. Joining Shades in this new musical endeavour is Joss Riot (lead guitar), Jimmy Gunn (guitar), James Crofts (bass) and Gaz Wilde (drums).

Wildside Riot have an incredible live energy and bring an exciting attitude and energy to an a times lacklustre scene. The band have recently performed at Hard Rock Hell and have two London shows early in ’13, firstly supporting John Corabi (The Scream/Motley Crue) at the Underworld on January 24th, with Bai Bang at Surya Kings Cross on February 15th and will hold their album launch at the Unicorn on February 2nd. See the band’s website at www.wildsideriot.com for details.

You can currently pre-order ‘No Second Take’ from Amazon, and it will be avalible on iTunes starting on January 28th.