Founded in 2014, Four By Fate features Tod Howarth on vocals, guitar and keyboards; John Regan on bass; Patrick James on guitar; and Rob Affuso on drums. The group will be releasing its debut album Relentless on June 3, 2016. 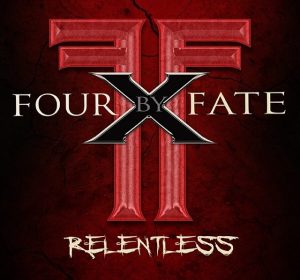 Four By Fate‘s bio on their Facebook page states (with slight edits):

The seeds for the formation of Four By Fate were planted some 30 years ago, when Grammy® Award winning bassist/songwriter John Regan encountered vocalist, guitarist, keyboardist, songwriter Tod Howarth (Ted Nugent, Cheap Trick, and Frehley’s Comet) while Howarth was on tour performing with Rock and Roll Hall of Famer’s Cheap Trick.

Adding further rock pedigree, other contributors to the Four By Fate story include Stet Howland (drummer for WASP), Sean Kelly (guitarist for Helix and Nelly Furtado) and celebrated Twisted Sister drummer AJ Pero, who recorded six tracks on the album before his untimely passing in 2015. The drum tracks that Pero recorded for Relentless are thought to be his last recordings.

Four By Fate: It’s Over Now