The four remaining members of Twisted Sister — frontman Dee Snider, guitarists Jay Jay French and Eddie Ojeda, and bassist Mark Mendoza — will be making appearances at the Spooky Empire event held at the Tampa Convention Center in Tampa, Florida, USA on November 1 and 2, 2019. Of note, it is not advertised that Twisted Sister will actually be performing at the Spooky Empire event. Snider announced yesterday that he was taking a break from performing any concerts although he was open to playing a song or two with other artists. 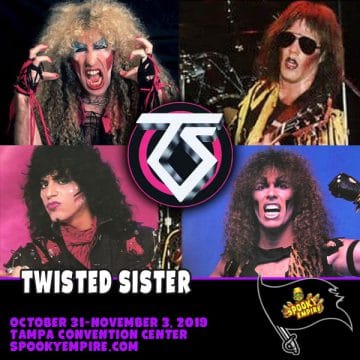 “What do you want to do with your life?!?

You want to come to Spooky Empire and meet Twisted Sister!

Dee Snider, Jay Jay French, Mark Mendoza & Eddie Ojeda will be at Spooky Empire, together again for a very exclusive, one time only gathering to celebrate the 35th Anniversary of Stay Hungry!

All four members will be available for autographs on Friday, November 1st and Saturday, November 2nd, plus be sure to catch their Q&A and photo ops!

Don’t miss out on this rare opportunity, ONLY at Spooky Empire in Tampa!

This is an appearance you DO NOT want to miss…plus join us for what will be an incredibly over the top 4-day Halloween event, starting on Thursday, October 31 and celebrating through Sunday, November 3! The plans we have in store for you are endless!!

Get your tickets and reserve your rooms today! Many overflow rooms are available. A variety of ticket packages are available as are multiple hotel choices in the downtown Tampa area, all just walking distance from the Tampa Convention Center!