Fozzy featuring WWE superstar and singer Chris Jericho are in the midst of their Canada Tour 2018 along with special guests Jared Nichols James, Deadset Society and Farewell To Fear. 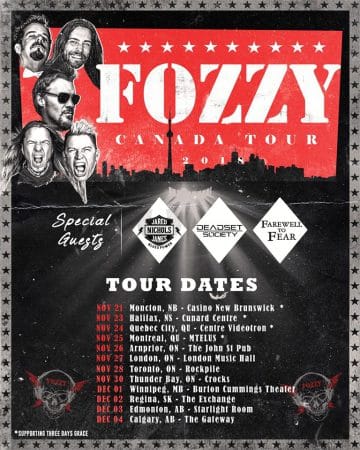 Fozzy played at The Rockpile in Toronto, Ontario, Canada yesterday and Sleaze Roxx has received reports that it looked like Jericho was miming on stage (i.e. lip synching).

One concert goer reported to Sleaze Roxx that they were disappointed to see that Jericho was miming on stage to the point that it ruined the concert for them.

Video footage of Fozzy performing live at The Rockpile was recently posted on Facebook (see below) and none other than former Skid Row frontman Sebastian Bach (under the alias Sebastian Bierk) apparently posted the following comments at 0:00 and 0:52 of the video, “Wow he mimes to a tape very well” (see below).

Wikipedia describes lip synching as follows: “Lip sync (short for lip synchronization) is a technical term for matching a speaking or singing person’s lip movements with prerecorded sung or spoken vocals that listeners hear, either through the sound reinforcement system in a live performance or via television, computer, cinema speakers, or generally anything with audio output in other cases. The term can refer to any of a number of different techniques and processes, in the context of live performances and audiovisual recordings.

In film production, lip-synching is often part of the postproduction phase. Dubbing foreign-language films and making animated characters appear to speak both require elaborate lip-synching. Many video games make extensive use of lip-synced sound files to

create an immersive environment in which on-screen characters appear to be speaking. In the music industry, lip-synching is used by singers for music videos, television and film appearances and some types of live performances. Lip-syncing by singers can be controversial to fans attending concert performances who expect to view a live performance.”

With respect to “Using real singing and some lip-synching”, Wikipedia states: “Some singers habitually lip-synch during live performances, both concert and televised, over pre-recorded music and mimed backing vocals; this is known as singing over playback. Some artists switch between live singing and lip-synching during performance, particularly during songs that require them to hit particularly high or low notes. Lip-synching these notes ensures that the performer will not be out of tune and that the artist will not strain his or her voice too much during an arduous concert. Once the difficult portion of the song has passed, the artist may continue to lip-synch or may resume singing live. Some artists lip-synch choruses during songs but sing the main verses.”

This is not the first time that Jericho has been suspected of miming on stage as the following Facebook comment on August 12, 2018 indicates: