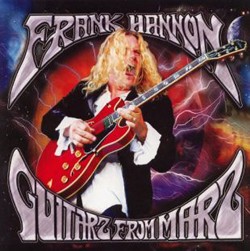 RedHawk Records are proud to announce that next week will be the digital release of the Frank Hannon Band’s classic ‘Guitarz From Marz’ album with a few bonus tracks, available for download on iTunes and Amazon. Frank Hannon is best known as the guitarist, songwriter and a co-founder of the multi-platinum band Tesla.

Originally released in 2005, the digital version of ‘Guitarz From Marz’ will contain the original recordings of the Frank Hannon band featuring drummer Robbie Furiosi and Joel Krueger on bass, and the songs “Eye Of The Mind”, “Touch Of Magic”, plus two never before heard songs from the concept.

RedHawk Productions was co-founded by 25 year veteran of the music industry Frank Hannon, who shares his vast experience in the recording studio, video production, digital marketing, radio promotion and world wide touring. Having been signed to a major label in the mid 1980’s Frank is excited to see the industry continuing to progress for the positive, giving greater control to the artists themselves.

Artistic Freedom is the foundation of the RedHawk philosophy. Their team of first-class producers, engineers, graphic artists and multi-media marketing professionals are focused on bringing new and creative music to the masses.

Today’s fast paced and evolving musical landscape requires a modern record label to be able to quickly adapt and be at the forefront of new trends and technologies. RedHawk Entertainment fully embraces the digital world while honoring the quality of craftsmanship shown to us by The Beatles, Jimi Hendrix, Willie Nelson, Johnny Cash and a host of others that have shaped generations through the power of their music.

Frank Hannon can be found at frankhannon.com and his RedHawk company at redhawkrecords.com.