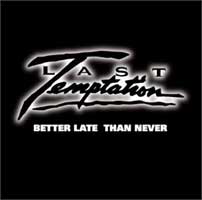 New York based rockers Last Temptation have just re-released their record Better Late Than Never which is available now at www.lasttemptation.org.

Vocalist Frank Vestry of Marcello/Vestry says: “This is a record that we’ve all worked very hard on and that we think the Melodic Rock Community will really like. I also think the Marcello fans will enjoy Arnie’s guitar style.”

Guitarist/Songwriter/Producer Arnie Miot started the group and along with Vestry and bassist Steve Hervatic made a big buzz on the New York scene in the early 90s.The band also states: “We felt that it was time to finally release this record the right way. So here it is, Better Late Than Never. We hope you enjoy it!”

Better Late Than Never Song List:
1 Break It
2 Last Temptation
3 Catch Me Now I’m Falling
4 Without Love
5 Oh So Easy
6 Emotions
7 Sailin Away (Northern Winds)
8 Save Me
9 Next To You
10 Queen Of Ice