With the surprising news yesterday that lead vocalist James Durbin was no longer in Quiet Riot and Jizzy Pearl was back in the band, one might assume that this was Frankie Banali‘s doing given that the band’s long-time drummer fired the previous (previous) singer Seann Nicols just before the group was about to release its new studio album Road Rage. 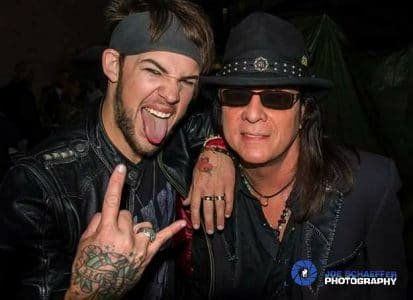 Sleaze Roxx readers will recall that Quiet Riot were supposed to release their studio album Road Rage with Nicols on lead vocals back on April 21, 2017 before replacing Nicols with Durbin in early March 2017, and then quickly electing to re-record the songs for Road Rage with Durbin handling the lead vocals and delaying the release of the album to August 4, 2017.

It appeared that this was going to be a case of déjà-vu since Quiet Riot were scheduled to release their new studio album Hollywood Cowboys (with Durbin on lead vocals) via Frontiers Music Srl on November 8, 2019 and all of a sudden, the band was getting rid of its singer shortly before the record’s release.

However, Banali has been responding to a Facebook post on his own page from yesterday and advising that Durbin actually quit Quiet Riot despite the rather odd timing since the band is about to release its latest studio album in now less than two months.

Banali has posted the following comments:

“HE GAVE NOTICE EFFECTIVELY QUITING TO FOLLOW HIS OWN PATH…….”

“YOU CAN’T TIME WHEN SOMEONE QUITS…….”

In terms of Pearl replacing Durbin, Sleaze Roxx has reviewed concerts with Quiet Riot performing live with each of them.

In its concert review of the M3 Rock Festival in Columbia, Maryland, USA on May 1, 2015, Sleaze Roxx stated as follows about Pearl‘s performance and fit with the band: “Next up was the legendary Quiet Riot which only has drummer Frankie Banali left from the group’s most famous and popular line-up. Having seen the band play live about two years ago when lead singer Scott Vokoun was still in the band, I was very intrigued to hear how new lead vocalist Jizzy Pearl would sound and fit with the rest of the band. My verdict is that I really like Pearl fronting Quiet Riot. Not only does he do justice to the Quiet Riot classics but I found that the group felt like a band of  “closer” equals — although Banali is unquestionably the leader — given that Pearl has a solid heavy metal resume under his belt having fronted bands such as L.A. Guns and Ratt in the past. Having seen the Vokoun fronted Quiet Riot in the past, it sort of felt like that version of the band had three metal veterans with a rookie vocalist.”

Sleaze Roxx opined as follows about Durbin‘s performance in its review of Quiet Riot‘s show at the Riviera Theatre and Performing Arts Center in North Tonawanda, New York, USA on December 16, 2017: “This is as good as any point to let you know how impressed that I was with Durbin. His singing and vocal range are off the charts. I can totally understand why Banali wanted him in the band even though the singer could be his son or even his grandson as Durbin announced that he was going to turn 29 years old in the near future while Banali turned 66 years old last month.”