Frankie Banali And Paul Sabu Team Up In Acid For Blood 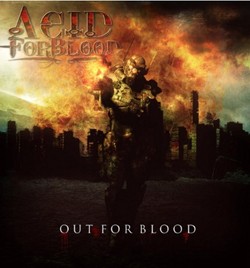 Quiet Riot drummer Frankie Banali has teamed up with vocalist/guitarist Paul Sabu To Form Acid For Blood. Rounding out the band is guitarist Linkan Andersson and bassist Martin Karlsson.

The band’s debut album ‘Out For Blood’ will be released in 2012 and sound samples can currently be heard on the band’s website at www.acidforbloodonline.com.

Frankie Banali says, “Now this is what I call a rock album! Recording the drums for this record is the most fun I’ve had with my clothes on in a very long time.”

‘Out For Blood’ will contain the following tracks, “Rock The Nation”, “Cracked The Sky”, “Out For Blood”, “Thanks For Nothin”, “Turn Up The Music”, “Red White And Blues”, “Desolation”, “Kill Shot”, Rocket Up!” and “The Fear Is Gone”.