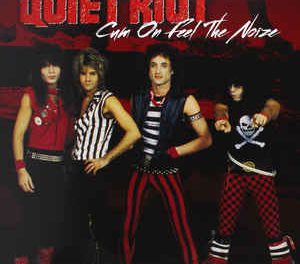 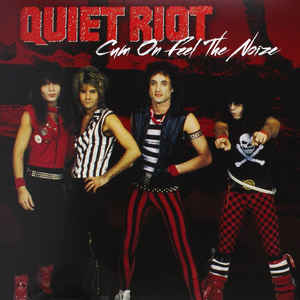 Banali was asked about how a lot of Quiet Riot‘s songs start off with a drum part to which the drummer shared: “To me it’s like a race car. Somebody sets the pace for the others to follow. I was the one who usually set the pace. The interesting thing about one of my more famous intros “Cum On Feel The Noize” was that it was not supposed to be on the record. The producer wanted us to record it. I didn’t care one way or the other but Kevin [DuBrow] despised the song. I was aware of the song’s originator Slade but they were not the type of band that I would have listened to. Kevin did not want to do a song that had been written and recorded by someone else. We all came up with the idea that we would tell the producer that we were working on that song although we never did.

The inevitable day came when we actually had to record it and in theory it was supposed to be an intentional train wreck. We wanted to make it so the producer couldn’t even use it if he wanted to. There we are in the studio looking at each other and there was some arguing. I went into the engineering room and told him that we hadn’t worked on the song and that we were going to tank it. I said that he might want to record it to be funny. He said OK. The producer comes in. There is no intro. If you listen to our version of the song it doesn’t start in the same place as the original. I actually forgot a verse or chorus that does not exist in our version. I started playing that drum beat and the others joined in. Kevin of course was waiting for it to fall apart but we just kept playing. It’s in my DNA to do the best job I can so I vamped and it turned out to work within the song. When we finished playing the producer said it sounded great on the first take. The engineer happened to record it and when we listened to it back it worked. Kevin on the other hand was furious.”

In terms of new material from Quiet Riot, Banali stated: “We are currently recording the vocals for a new album. We’ve just brought to the Quiet Riot family a fantastic singer named James Durbin. He was on Season 10 of American Idol. I think he was fourth from the top before he was passed over. James Durbin is not only an amazing singer, but he is more importantly, an amazing person. Of course he is much younger than the rest of us but you wouldn’t know it by how much he loves rock and roll, specifically heavy metal. We are in the studio in between shows and once the vocals are completed I will go in and make sure the mixes are done. Then I will deliver it to the label so it should come out sometime in the summer.”

Banali went on to point as follows about Durbin: “The interesting thing is that he is as tall as Kevin. They are both about 6’4” which gives him a huge presence on the stage. He also has the same energy that Kevin had and his vocal range is ridiculous. We are very fortunate to have him.”

You can read the rest of the interview with Frankie Banali at Michael Aubrecht‘s website.