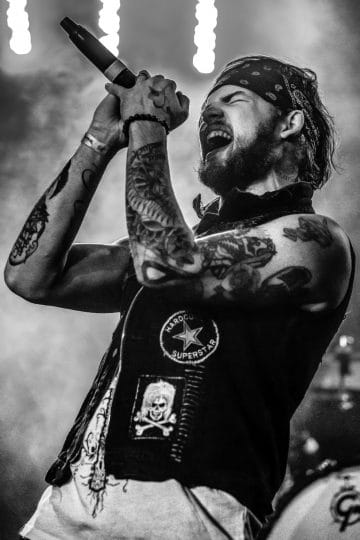 Quiet Riot‘s long-time drummer and band leader Frankie Banali continues to answer questions from certain fans via Facebook after the news that singer James Durbin quit the group and Jizzy Pearl is replacing him.

The timing of Durbin‘s departure seems odd since Quiet Riot are about to release their second studio album with him on lead vocals. Hollywood Cowboys is scheduled to be released via Frontiers Music Srl on November 9, 2019.

Banali previously disclosed that it was Durbin that quit the band.

In a Facebook post yesterday, Banali further revealed that Durbin had indicated to him that he didn’t want to continue with the band in 2020.

Quiet Riot fans will recall that it was announced in early October 2016 that Pearl would no longer be the lead vocalist for the band and was being replaced by Seann Nicols.

This is pure speculation but it would appear that there has been a contractual stipulation between Quiet Riot and at least its various newer members in the last few years that a member must give a notice period of at least a couple of months if that member decides to leave the group.

Below are various Facebook comments made by Banali about one day ago below the article from XS Rock titled Quiet Riot Shakeup – James Durbin Out As Singer And Jizzy Pearl Returns that the drummer forwarded two days ago: 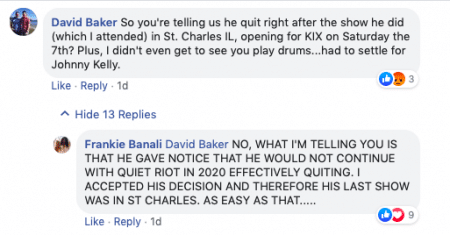 The following are additional Facebook comments made by Banali made about one day ago below his Facebook post on September 8, 2019 announcing the return of Pearl in Quiet Riot: 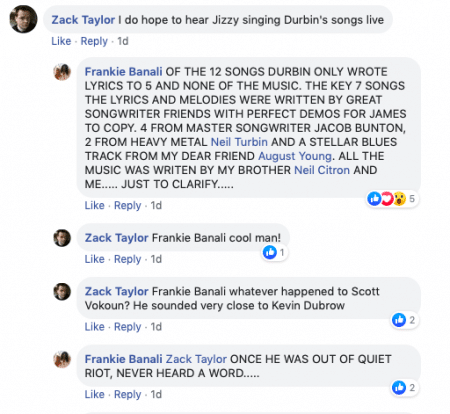