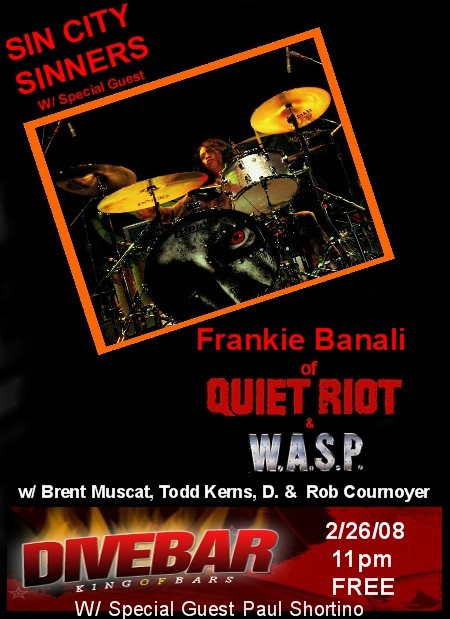 Former Faster Pussycat guitarist Brent Muscat will be joined on February 26th by Quiet Riot drummer Frankie Banali at a Sin City Sinners show. Brent had this to say about the pair teaming up:

My friendship with Frankie Banali began on November 9 1989. It was just two days after my old band Faster Pussycat’s original drummer was arrested for Fed Exing heroin to himself.

We were up for the Motley Crue “Dr. Feelgood” tour, but it was in jeopardy due to the controversial loss of our drummer. Our manager at the time was Warren Entner and he also used to managed Quiet Riot. He suggested we bring in Frankie, as Quiet Riot was not together at the time. I was told that Frankie bought our two records and basically learned the songs on the plane. Frankie went on to tour with us through 1990 and if you don’t blink you can see him in the House of Pain video.

Over the years I have said hello to Frankie at Quiet Riot shows and I always thought if the right situation arose I would get to play with him again.

After the tragic loss of Kevin Dubrow, I reached out to Frankie to send my condolences and let him know when he was ready that we had a spot for him here in Vegas with my new band SIN CITY SINNERS.

I’m happy to say that this Tues, Feb 26th at the DIVEBAR, Frankie will be taking up my offer. Also joining us on stage to sing a few songs will be the great Paul Shortino.

Trust me this is one night you don’t want to miss.
See you there
Brent Muscat