Quiet Riot‘s long-time drummer and band leader Frankie Banali passed away back on August 20, 2020 after a hard fought battle against pancreatic cancer. His wife Regina Banali posted a touching message on her Facebook page about their life together and some of the struggles that the Quiet Riot drummer had to endure over the last 10 years or so. 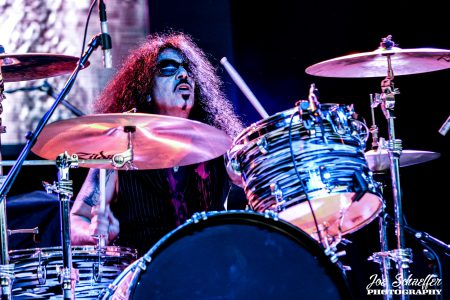 “The only thing that could have ever separated us…

I’ve gotten through my first week without him and it has been very difficult. Missing him is so hard. I keep wishing I could wake up and tell him about the bad dream I had. We had a great love and the best life together. When he got sick I loved taking care of him no matter what. He was a tough fighter but cancer was tough on him. Not many people knew that he also suffered from a bad case of tinnitus from years of playing and not protecting his ears. He also suffered from a torn rotator cuff on his right shoulder that needed surgery in 2010 but he had just gotten the band back together and didn’t want to take a year off to recover from surgery. He played through it and over time it went well past the point of surgical options. Doctors could not understand how he was still able to play. He didn’t want people to know about it but he suffered from that a lot. It is a relief to know that at least he is no longer in any pain or sickness.

He was and always will be the most incredible person I have ever met. People loved him everywhere he went. You couldn’t not love him if you were in his presence and under his charm. He loved so hard. His love for me was enough to last me for a lifetime. Every step forward, every day I live I will have his love with me. My purpose was building a life with him. Then it became taking care of him. Now and for the rest of my life my purpose is to be a steward of his legacy, his life’s work, and to care for his daughter and the people and things he loved and cared for.

I have been comforted seeing the outpouring of love and tributes to him and I’m blown away that he was trending on twitter. There are so many people coming forward to speak about him and say how he touched them in some way. I was the lucky one that got to share a life with him and have that life force encompass my world for as long as I had him. I am so grateful for that.

Thank you Frankie. That was the best 11 years and 9 days ever.