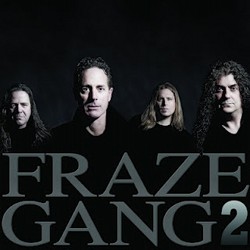 In an age of when oversized two-chord aggression and auto-tuned talent-free anthems pass for popular music, the Canadian rock veterans collective known as Fraze Gang are taking the hard road to reach the brass ring. Rather than kiss up to the latest trends in order to make an impression and a buck, the quartet has chosen good old-fashioned hard work and a genuine passion for making music to carry their new album, quite simply dubbed ‘Fraze Gang 2’.

Fraze Gang’s roots go back 28 years, when vocalist/guitarist Greg Fraser and bassist Stevie Skreebs launched Brighton Rock, who were a popular draw on the hair band scene in Canada through the late ’80s and into the ’90s. The band split up in 1991 following their last official album, ‘Love Machine’, with the rise of the grunge scene essentially forcing Brighton Rock to call it quits. Fraser and Skreebs were anything but idle, however, saving their energy until the time felt right to unleash some new music on the world. Recruiting drummer Phil Epp, the trio laid down 13 tracks for what would become Fraze Gang’s independently released self-titled debut in 2006 (issued via Bongo Beat Music in 2008). And while it didn’t break the bank, the 13 song arena rock record established Fraze Gang as a full-on no-nonsense band with old school ’80s values.

The release of the three song digital EP entitled ‘Don’t Call Us’ in 2009 was the first in a series of building blocks that led to the creation of ‘Fraze Gang 2’. The record is a full length follow-up that’s considerably heavier than what some people are expecting. From the Judas Priest flavored opener “Saint Or Sinner” to the brazen Brighton Rock-ishness of “White Lightning” to the AC/DC vibe of “Tough Enough”, the new album is a both a nostalgic trip down memory lane and a bold reminder of what real rock is all about.

Fraze Gang’s new focus and grittier attitude is due in part to the addition of guitarist Derek McGowan as a full time band member. Initially conscripted to fill out the band’s sound for live gigs, McGowan was brought on board full time to bring the same energy and clout to the band’s studio work. The results are readily apparent on ‘Fraze Gang 2’ from the first track in.

An additional bullet in Fraze Gang’s belt is having renowned producer Beau Hill behind the mixing desk for the new album. Known for his extensive work with ’80s artists such as Ratt, Alice Cooper, Europe and Winger, Hill is a perfect match for what Fraze Gang were trying to accomplish.

Now a solid four-piece, Fraze Gang are officially back in action and in for the long haul. The band is the #1 priority, and the focus is on the future rather than the glories of the past.

The new Fraze Gang album will be available in stores at the end of June in Canada and at the end of July in the rest of the world, but you can order it now directly from Bongo Beat Records for a physical copy. To order ‘Fraze Gang 2’ visit www.cdbaby.com or the band’s official website at www.frazegang.com.