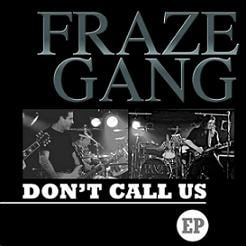 Fraze Gang has released a new 3 song digital EP available worldwide via iTunes. The 3 tracks, ‘Rampage,’ ‘This is it,’ and a kick ass cover of 70’s rockers Sugarloaf’s monster hit ‘Don’t Call Us’ were once again mixed by legendary producer Beau Hill. The band is very excited with the results and would like to thank Wayne Berge and Beau Hill for their dedication and support.

“As Beatlemania sweeps across the world again, we’re reminded of anearlier era when sheer talent and dogged determination paved the way tosuccess. In 1975, SUGARLOAF chronicled their struggle for a record dealwith the cheeky ‘Don’t Call Us’ – rocketing to #9 on the US charts.In the song, one of the label excuses is that it’s all been done before by acertain John, Paul, George and Ringo – and funny enough, the publishingto the song was subsequently bought by Paul McCartney via his MPLCommunications (Sir Paul certainly knows something about a hit record).’Don’t Call Us’ was originally a dig at CBS Records who had turned the banddown. Sugarloaf persisted and scored other hits, including the classic rockstaple, ‘Green Eyed Lady’ (#3, 1970).

Fraze Gang are no strangers to the charts themselves as singer/guitaristGreg Fraser penned several AOR hits for Canadian hair metal stalwartsBrighton Rock(‘Can’t Wait For The Night’, ‘Hangin’ High & Dry’, ‘We Came To Rock’ etc),picking up several Gold albums along the way.

‘Don’t Call Us’ is the lead track from their digital only EP,available on iTunes and elsewhere.Mixed and Mastered by Beau Hill (RATT, WARRANT, ALICE COOPER, etc)

Buy it here now. Bio information can be found at this location.”

For those of you not signed up to iTunes, the Fraze Gang EPwill available worldwide on Amazon and Cd Baby shortly.