The following message was posted on Temple of Mystery Records‘ Facebook page yesterday: 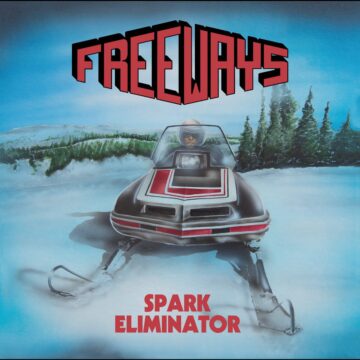 “Links in the comments!

We are proud of announcing the release of Freeways‘ new E.P., Spark Eliminator, on digital, as well as black and limited green vinyl (exclusive to Temple of Mystery Records), to be released on October 6th, 2021!

Freeways are back and they’re cruising into your ear canals with two knockout tracks of grade-A Canadian hard rock, bringing you all their characteristic melodies, hooks and heft of olde. For fans of UFO, Wishbone Ash, Angel Witch and Dark Star!

NOTE: Non-EU residents can order from Bandcamp and the Temple of Mystery website.

EU-residents can now order from the ToM/Freeways Bandcamp (they are registered for VAT and you will avoid surprise fees).”

Sleaze Roxx stated the following in its review of Freeways‘ album True Bearings: “Of the seven rockers on True Bearings, you will be hard pressed to find anything to push forward on with a mix of bar-made head boppers like “Battered & Bruised” and the edge of Foghat sounding “Dead Air”, driving rockers like “Sorrow (Love In Vain)”, and melodic hard rock ala “Just Survival” and the catchy-cool title track. Toss in the Triumph style groove of over six minute “Time Is No Excuse” and what you have is a tasty collection of choice guitar-driven seventies classic rock and roll for modern times.

At a time when over-produced, computer generated, band in a box faux sounds rule the airways and webways, it’s a downright rock and roll blessing that there is Freeways, a real rock and roll band that puts out actual flesh and blood made music. But what should we expect? If anything Canada is known for real good beer, real old school hard-nosed hockey, and yeah, real rock and roll.”