The ongoing conflict between Italian record label Frontiers Music Srl and singer Dino Jelusick, or at least part of it, is continuing to air in public as both parties took to Facebook yesterday to outline their positions on a recent copyright issue pertaining to a song outtake from the new Arjen Anthony Lucassen’s Star One album Revel In Time, which was released four days ago (on February 18, 2022).

The following message was posted on one of Jelusick‘s Facebook accounts yesterday: 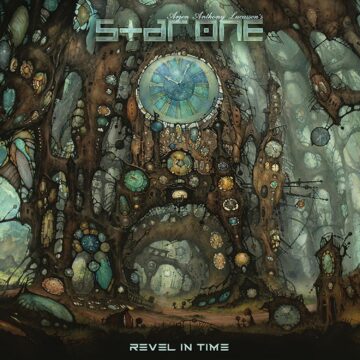 I wanna congratulate Frontiers Records (Mario De Riso and Serafino Perugino) for yet another false, fraudulent and illegal claim they made on my YouTube chanel. They reported my “star one” video that fully belongs to Arjen and Inside Out (inside out even made CLAIM which means they OWN IT and gave me permission to keep it and they are the COPYRIGHT OWNERS of it). YouTube wake up.

Of course I’m gonna get it back because I never post something which I don’t have the right to.

Im not gonna be silent anymore about this career and now personal abusment these guys are playing on me while the court is still going for 2 freakin years. It also affects mental health.

Just so you know who they are.”

“This is just sick. I’ve been putting up with crap from Italy for 2 years. They block me for work everywhere, threaten me, take down my videos. From now on I’m sharing every threat and every bullshit they make.”

Frontiers Music Srl then responded with the following message on their Facebook page yesterday:

“It has recently come to our attention that the Artist Mr. Dino Jelusic made a public statement in which he complains about Frontiers “illegal and fraudulent activity” aimed at claiming the copyright on the recording of the song ‘The Year of 41’ an alleged “outtake” of a song included in the new STAR ONE album. Once again Mr. Jelusic – as it has already happened in the past – releases statements addressed to Frontiers which are blatantly incorrect and ultimately false.

In relation to it mr. Jelusic and Frontiers have a lawsuit that is currently pending in front of the court of Naples, Italy. Frontiers believes that it contractually has the rights to the exclusive services of Mr. Dino Jelusic for recordings. The Artist had initially recognized this agreement, but subsequently, and without any explanation, refused and even denied such right to exist. Therefore, for as long as he will be continuing to behave in breach of that exclusivity clause, Frontiers will have to act in defense of its interests which continue to be damaged by his behaviors.

For the record mr. Jelusic himself, when he released the single in question stated:

I ORIGINALLY SANG ON THE NEW STAR ONE ALBUM BUT DUE TO SOME LEGAL ISSUES I WAS UNFORTUNATELY PULLED OUT OF IT. WITH THE PERMISSION FROM ARJEN I DECIDED TO UPLOAD MY VERSION, THIS IS UNOFFICIAL. OFFICIAL ALBUM VERSION WAS SUNG BY MY HERO AND NOW A FRIEND MR. JOE LYNN TURNER AND MIDDLE SECTIONS BY MY ANOTHER FRIEND, THE AMAZING…

Frontiers – and its personnel – therefore does not believe to have done any abuse. Frontiers is only acting in defense of the rights that believes are stated in the existing agreement with mr. Jelusic. We understand and share the disappointment of many fans and we all hope this unpleasant story can finish sooner than later.

Back on February 18, 2022, Jelusick‘s Facebook account included a YouTube link to his “unofficial” version of the song “The Year of ’41” that did not make it onto the new Star One album:

“Congrats to my dear friend Arjen Lucassen on his new Star One album.

I’m so happy I had the chance to work with him and I originally sang on the new Star One album but due to some legal issues I was unfortunatelly pulled out of it.

With the permission from Arjen I decided to upload my version, this is unofficial. Official album version was sung by my hero and now a friend Mr. Joe Lynn Turner and Middle sections by my another friend, the amazing Will Shaw. Enjoy and listen to the full album. 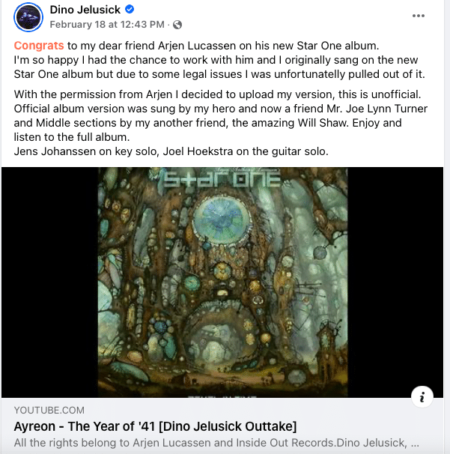 If you click on the YouTube page for “Ayreon – The Year of ’41 (Dino Jelusick Outtake)“, the following message now comes up: 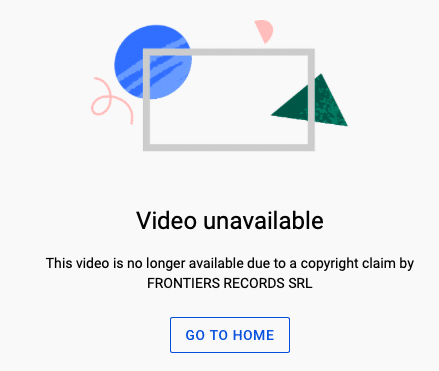