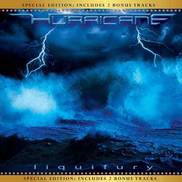 Frontiers Records announces the re-release, in limited edition, of some of long out of print classic releases of its catalogue on August 27th. Subject to the campaign will be four albums.

HURRICANE “Liquifury”, the third album from the amazing US Hard Rock band featuring singer Kelly Hansen (who later went on to join Foreigner) and drummer Jay Schellen (who will shortly appear on the Unruly Child reunion album). This reissue will include two bonus tracks: Push, Promises (both have originally appeared on the Japanese edition of the album). Details and samples available on www.frontiers.it/album/4741/

SEVENTH KEY “Seventh Key”, the debut album from the collaboration between KANSAS bassist Billy Greer and former CITY BOY guitar player Mike Slamer. Both have played together in STREETS, the band formed by Steve Walsh in his brief hiatus from Kansas from 1983 to 1986. This album includes some songs which were originally demoed for the KANSAS “Power” album and feature performances from Steve Morse, Phil Ehart, Steve Walsh and Rich Williams among others. This reissue adds two bonus tracks The Storm Rages On (original Japanese bonus track) and Remember You Well (US bonus track which was written by the other ex KANSAS, Kerry Livgren). Details and samples available on www.frontiers.it/album/4742/

SEVENTH KEY “The Raging Fire”, the band’s second album. From a studio project SEVENTH KEY evolved in a more stable unit which saw Greer and Slamer joined by Terry Brock and Jamie Thompson. Defined as “A brilliant album!” by Melodicrock.com at the time of the release, this reissue comes with one bonus track “Love Train”. Details and samples available on www.frontiers.it/album/4743/

WETTON / DOWNES “Icon”, the album that marked the reunion between Geoff Downes and John Wetton. Originally released in 2005, this is the album that re-sparkled the flame between the two artists and brought later two more albums and the original ASIA line-up reunion. This edition will see the addition of 5 bonus tracks: Heat of the Moment 05; Paradox/ Let Me Go (different version); The Smile Has Left Your Eyes 05; In The End (different version); There In Your Bed (which originally appeared on the “Heat of the Moment 05” EP). Details and samples available on www.frontiers.it/album/4740/