The debut EP Accidental Gathering from Dutch rockers Frontline is now available. The group consists of lead vocals Thomas Kunst, guitarists Arti Flinkerbusch and Thijs Stoffelen, bassist Steven Wijtenburg and drummer Jamal van Kastel. Frontline are about halfway done recording the songs for their debut full-length album and expect it to be released before the summer of 2021. 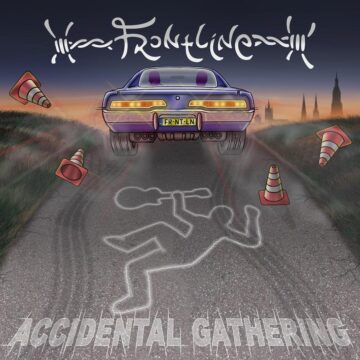 Speaking exclusively to Sleaze Roxx, Flinkerbusch explained how Frontline got formed as he stated: “The band was formed in Delft in the Netherlands in the summer of 2018. I’d written a bunch of hard rock songs and started looking for musicians who I could perform them with. After unsuccessfully trying out a few people I found by ads, I found the right musicians through a jam session which is organized once a month in a medieval cellar in our city centre. It’s a great way to meet new musicians as you can already get to hear them play and see whether you have a click. The band consists of Jamal on drums, Steven on bass, Thomas on vocals, and Thijs and myself on guitar. I play most of the leads, and sometimes Thijs plays some of them too, such as the solo on “Keep It A Secret.” My influences are mostly Guns N’ Roses, Thin Lizzy and other hard rock legends from back in the day. Although everybody in our band digs that, the members’ individual tastes are diverse. For instance, Steven‘s background is more punk rock and Jamal‘s more metal. This makes the band’s sound an interesting mix.”

In terms of how the band name Frontline was chosen, Flinkerbusch indicated: “I once heard a good quote about great music being on the line between chaos and order. It needs to have the exact right balance between being repetitive and being innovative. Being right on that line, on the “frontline”, makes it exciting. It’s also what I associate with the picture of a hard rock band standing on a stage playing their music — them being on the frontline of what matters by putting themselves out there. Some members of the band were in favor for the name “Arti’s Monkeys.” I’m glad that didn’t make it.

With respect to what the rock music scene is like in The Netherlands, Flinkerbusch opined: “I think the rock music scene is mostly concentrated in the Hague. That’s where some of the famous Dutch bands such as Shocking Blue, Golden Earring and Anouk are from. Delft is right next to the Hague and the scene here has quite a few bands, often started by the university students. Jam sessions are frequently organized in Delft, which allows musicians to connect. Before the coronavirus restrictions, plenty of bars and small venues were contributing to the local music scene by hosting local gigs. Our practice studio, SPOD, supported us a great deal by organizing gigs for the bands who practice there.”

Frontline‘s “Keep It A Secret” single: