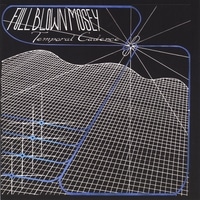 Full Blown Mosey are a melodic hard rock band from Wyoming. The guys have been playing together for many years, playing the local clubs and doing the best covers of classic guitar rock. Their influences are plentiful, but they all seem to agree on a heavy guitar sound with a great melody on top.

FBM can be traced back to when Greg and Rocky played together in a band after high school. They did covers of Maiden, Dokken, D.A.D., Scorpions and others of the genre. They also wrote their own material. Some parts of the Temporal Cadence album were written in those days. Greg left the band and Rocky met Kirk, newly transplanted from Bakersfield California, who excelled at lead vocals, bass guitar and songwriting.

Their backgrounds were slightly different, with Kirk more in tune with rock of the 70’s and Rocky grounded in the metal of the 80’s, but it was a great combination. They soon began gigging at the biker clubs at a time before classic rock ruled the radio. Many of their audience had never heard such dead-on impressions of bands like Led Zeppelin, Night Ranger, or Bad Company in years. They also played newer material, the likes of Megadeth, STP and Pearl Jam, all mixed with their own songs. They were an instant success, and soon were booked almost every weekend playing for their motorcycle-riding brethren.

After a few years, Greg rejoined the band. Greg had a great voice in addition to his guitar playing skills. The talents of Greg, Kirk, and Rocky blended the band into a cohesive group and Full Blown Mosey was born. Mosey fans had asked for years, ‘when are you guys doing an album?’ Over the years, they had recorded several demos, but they wanted to do a record properly. In 2004, drummer Dale Ortega joined, and it was decided that they would record the album themselves. Rocky converted his basement into a studio and work began fresh in 2005. Juggling day-job work schedules and regular gig dates, the guys worked hard to get tracks laid down.

Sadly before the album was finished, Dale became ill and passed away in 2006, leaving an empty spot in the hearts of the fans and the band. After recovering from their loss, FBM knew they had to finish the album, and they would dedicate it to their fallen band-mate. The resulting album is ‘Temporal Cadence’. Played frequently on local radio, Glenn Lemons of KDLY-FM says, ‘The album rocks! It’s very well produced and has great sound quality. It’s kind of like Kiss and Pearl Jam mixed to Full Blown Mosey. I highly recommend it.’

Jaime was asked to join on drums after the album was released and when the guys were ready to play again. A natural, he learned by tapping on the steering wheel of his car and his friends suggested he try it out on a real kit. The guys are working on a new batch of songs for their second album, most of which Kirk has already written. Rocky says, ‘we might be more like a Zeppelin record as opposed to record you hear these days that sticks to a single style. You may hear a little bit of blues, metal, even folk and a hint of classical influence.’