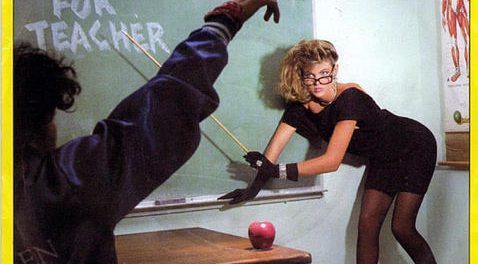 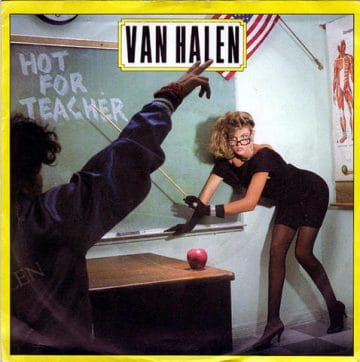 Among the fun facts noted in the article are:

The ending of this song comes from a demo song from the band’s club days, entitled “Voodoo Queen.”

An Oakland University student was suspended after writing an essay titled ‘Hot for Teacher.’ He later sued the school for 2.2 million. Full Story

The choreographed dancing scene featuring the band in maroon wedding style tuxedos was reportedly dubbed “Dave and the Pips” by the members of Van Halen.

There’s not one, but TWO models who play the teacher in the video. One was Donna Rupert (first runner-up in the 1981 Miss Canada pageant), and also Norwegian model, Lillian Muller. (Many websites list Wayne Gretzky’s wife, Janet Jones, as playing the teacher, but that’s untrue).

In one classroom scene where the teacher is dancing on the desk, a black board is featured with the numbers “20-9-8-19-25-12-15-8”. Each of these numbers corresponds to a letter of the alphabet. If you read the encoded word from right to left, you’ll notice it spells “HOLY SHIT.” This is the only known instance of such “hidden” gimmicks in a Van Halen video.

Tipper Gore, wife of then-Sen. Al Gore, was shocked by the ‘Hot for Teacher’ video. “The images frightened my children,” she said. “They frightened me!” By May 1985, Gore would form the Parents Music Resource Center, which lobbied the recording industry to create a ratings system apprising buyers of explicit content. But when the PMRC released its list of the “Filthy Fifteen,” it included songs by Madonna, AC/DC and Sheena Easton, but not Van Halen.

You can read the rest of the article “Hot For Teacher” Anniversary & Fun Facts! at the Van Halen News Desk.