FuZZrd consisting of Brett Petrusek on lead vocals / lead guitar, Robert Berg on bass, Eric Vobejda on lead guitar and Scott Savage on drums have released a video for their second single “Viral Connection” which features Slaughter frontman Mark Slaughter. The group is slated to release its upcoming debut album titled Monster Carnival in the late summer of 2021. 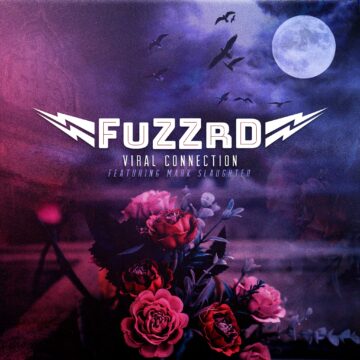 From the band’s press release (with slight edits):

“Minneapolis, MN – FuZZrd presents a second composition “Viral Connection” features a special guest appearance by Mark Slaughter on the recording and in the music video.

Guitarist Brett Petrusek shares, “Working with Mark on ‘Viral Connection’ was a total blast. He has such an iconic vocal sound. It’s both angelic and gritty at the same time. It’s uplifting yet heavy, which is kinda what FuZZrd is all about: darkness and light, and the haunted place in between. When we first began collaborating on the track, we immediately started geeking out on all thing’s guitar. I was super stoked to have his world class voice supporting the track, but his guitar overdubs, and wicked outro-solo were a welcome unscripted bonus that took things over the top. He’s a sick player. He has an exceptional ear for melodies. And, he’s such a great dude. We had a ton of fun!”

Drummer Scott Savage adds, “This was one of the songs that really got things rolling in a unique direction for the band. The dark and heavy intro guitar riff sets the tone for the pounding groove. It was one of the first songs we recorded as a band. As soon as we heard the playback, we all knew we were onto something special.”

Guitarist Eric Vobejda states, “Thunder and lightning bottom end, a monster of a down beat of drums, and evil genius lyrics topped off with a healthy dose of Mark Slaughter. This song is a hidden gem. If you are a guitar fan, this song is for you and you’ll love the loud, heavy Gibson guitar sounds. Mark‘s guitar and vocal contributions helped us make this song sound like a demonic Led Zeppelin deep cut that’s ready for battle. ‘Viral Connection’ is our art.” Bassist Rob Berg adds, “I appreciate how the song’s arrangement differs from other FuZZrd tracks. Lots of layers with interesting musical twists and turns. I love the production. It’s moody and totally pounding.”

Mark Slaughter shares, “I think the band is great, and it was a lot of fun working with them. They have a classic rock sensibility with a modern edge. It’s lean and it’s honest. They’re not chasing somebody else’s sound. They’re comfortable being right where they are. That’s where the best music comes from. It’s got to be in you. It’s got to reflect who you truly are.”

Slaughter admits that “Viral Connection” provided an opportunity to stretch his wings artistically, and he enjoyed the challenge. He continues, “It’s hard and heavy, with these super heavy lyrics. It’s not what I normally would do, but I respect what Brett does and who he is. So, I just tried to support that. When he asked me ‘what would you do?’ initially I heard the countermelody on top of the main guitar riff, and then I accented the vocal melody with guitar on the choruses. I did what the melody was asking for, and I think it came out really nicely.” Footage of Mark Slaughter was shot in Nashville, TN.”