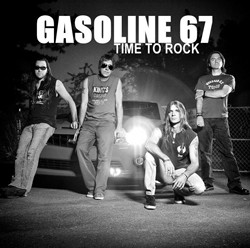 Famed produced Beau Hill, best known for his work with Ratt, Warrant and Alice Cooper, has remixed a couple tracks from Gasoline 67’s debut album ‘Time To Rock’. The two revamped songs, “Time To Rock” and “When the Lightning Strikes”, will soon be available at iTunes and can currently be heard at www.facebook.com/pages/Gasoline-67/108627112520236.

Based out of Jacksonville, Florida, with strong roots in Nashville, Tennessee, Gasoline 67 puts the four-on-the-floor, straight-ahead driving beat back into three chord rock. A long overdue approach in today’s music that centers around over-processed pop drivel. Going under the mantra that all you need are solid songs, straight-up guys and a stage to play on, Gasoline 67 does just that — knocks out the rock.

Gasoline 67 is fueled by sour mash and adrenaline. A potent combination that allows for Paul Marko (guitar), Mark Janssen (drums), Sonny Kane (vocals) and Doc Haygood (bass) to reach a combustible reaction during their energized shows.

The band was distilled from Florida swamp and Mississippi bayou ingredients that fermented into a high octane mix that was bottled into Gasoline 67’s initial full-length release, ‘Time to Rock’, currently available at www.gasoline67.com and iTunes.