Swedish rockers Gathering of Kings featuring a large number of Swedish artists have released a video for the track “Forever And A Day” from their first ever live show, which happened to take place at the prominent Sweden Rock Festival in 2019. 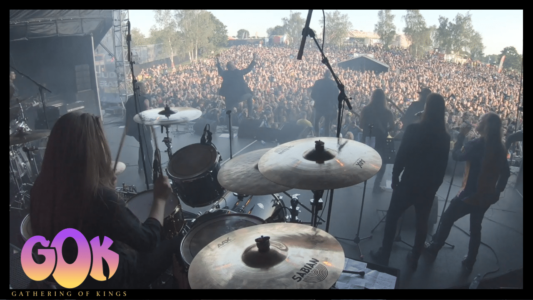 “Swedish melodic hard rockers, Gathering of Kings, have released the official live video for the song “Forever And A Day”, from Sweden Rock Festival 2019. The band’s first ever show! Filmed by Gunnar Sandborg and Oskar Wernberg at Teknikkompaniet.se and mixed and mastered by Thomas “Plec” Johansson at The Panic Room.

“Forever And A Day” is taken from the band’s debut album “First Mission“, which was released in 2019 via RN Records.

Gathering of Kings is created and supervised by Ron Dahlgren and Nina Dahlgren, bringing together top musicians from the current hard rock scene in Sweden. The idea was to create an AOR/Melodic Hard Rock project/band like Tom Galley‘s Phenomena or even Tobias Sammet‘s Avantasia, with multiple vocalists and instrumentalists. Victor Olsson is the main songwriter, with Alexander Frisborg co-writing the lyrics.

Gathering of Kings‘ “Forever And A Day” live video: