Black Sabbath bassist Geezer Butler was recently interviewed by Eamon O’Neill for UK’s eonmusic to promote his three solo albums Plastic Planet (1995), Black Science (1997) and Ohmwork (2005) that were reissued on vinyl and CD via BMG on October 30, 2020. 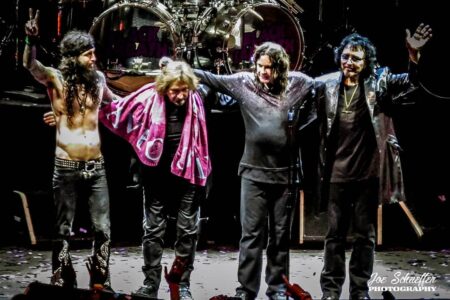 In terms of how he enjoyed Black Sabbath‘s final tour which also included original members Tony Iommi (guitar) and Ozzy Osbourne (lead vocals), Butler indicated: “I had a great time on the final tour, especially knowing it was the end. I seemed to put a lot of extra effort in, knowing that people wouldn’t see us again. I would have liked to do more dates, but Tony’s cancer treatment meant we had to shorten the tour.”

Butler returned to the stage with the band Deadland Ritual (that also featured drummer Matt Sorum and guitarist Steve Stevens) last year. With respect to playing live with Deadland Ritual and having Black Sabbath perform one more time at Aston Villa’s Villa Park to close out the band’s career, Butler opined: “I enjoyed the Deadland Ritual mini-tour, but it was strange not headlining the festivals and playing small clubs. We had an album worth of songs to record, then COVID struck, which put an end to recording, so I’m not sure if Deadland Ritual will ever carry on. There will definitely be no more Sabbath – it’s done.”

In regard to playing with Ozzy‘s solo band back in 1988 during the No Rest For The Wicked era, Butler stated: “It was nice working with Ozzy again, but I was drunk most of the time, so don’t recall much of it. The Moscow Peace Festival was amazing while we were at the stadium, but the hotel was horrendous. We had brought a truck load of British food and bog roll with us, as there wasn’t much food, and no bog roll at all to be had in the Communist Soviet Russia. Being a lifelong vegetarian / vegan, there wasn’t anything at the hotel I could eat, so I used to bring food back with me. One night, I placed my sandwich on the floor as there was no table, got up to get a book to read, and when I looked, the sandwich was black with cockroaches! It was definitely a great advert for capitalism!”

You can read the rest of the interview with Geezer Butler at eonmusic‘s website.