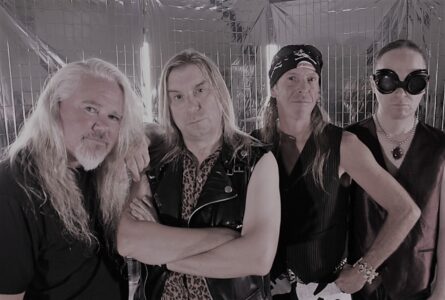 Canadian rockers Gelatin Skelatin consisting of frontman Brett Kelly, drummer Chad Walls, bassist Dan Brown and guitarist Myles Rourke have unveiled their cover of the Def Leppard track “Wasted” which first appeared on the UK rockers’ album On Through The Night, which was released back in 1980.

“Ottawa based rockers Gelatin Skelatin are pleased to release a single of their cover version of the Def Leppard classic “Wasted” on Dec 1st via all digital streaming sources.

“It’s December so we figured might as well give a new treat to our friends just in time for Christmas.” says singer Brett Kelly. “The early Def Lep songs are real bangers, so we felt like doing our take on one for fun.” He continues.

Kelly along with drummer Chad Walls, bassist Dan Brown and guitarist Myles Rourke are also looking ahead to 2022/23 where hopes are to resume playing live shows again.

“We’re optimistic about the pandemic allowing us to travel a bit more, so we are hoping to play some shows in Ontario in 2022 and maybe travel abroad in 2023. Stay tuned.” says Kelly.”