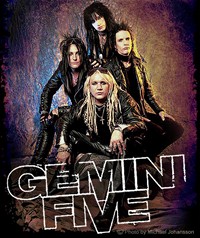 Gemini Five have released a demo recording of their new track “NOT FOR THE INNOCENT” from the Swedish band’s forthcoming album. The new demo can be previewed at www.myspace.com/geminifive

No release date for the new CD has been scheduled since the recordings have been postponed due to singer Tin Star’s throat problems.

Crashdiet’s vocalist Simon Cruz is laying down his voice on backing vocals on the CD. The recordings are being handled by Martin Sweet (also of CrashDiet) and produced by the team of Tin Star, Hot Rod and Martin Sweet, to follow up on the success on the”SEX DRUGS ANARCHY” and “SCREAM 4 ME” collaboration during 2007-2008.