KISS bassist, co-founder and singer Gene Simmons was recently interviewed by The Wall Street Journal and was asked how much money that he would personally bring in presumably on a show night. 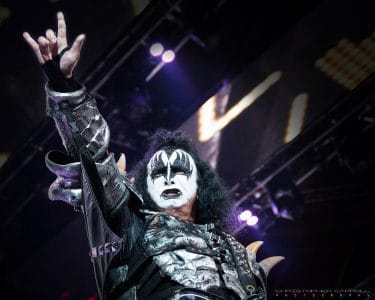 Simmons replied: “Let’s just say Paul [Stanley, KISS co-founder] and I are partners, and everybody else works for the organization. Everybody gets paid very well. I don’t want to quote figures, but this will be $150 or $200 million gross tour, not counting ancillaries, licensing, merchandise and stuff like that. It goes without saying that we also, in our restaurants and other places, hire vets, give to philanthropy and stuff like that. But how embarrassing is it before each show if I held up a check and said, “Look what a nice guy I am”?”

In terms of why Simmons is touring in his 70th year, the bassist advised: “To make more money. And we’re making bucket-loads, and I’m happy to say that. The guy that wins the lottery jumps up and down and runs to everybody and says, “Oh my God, I just made $100 million,” and everybody applauds. But the guy that works for it and makes $100 million, oh, he’s just boasting. Bitch, I worked for that money, I deserve the accolades more than the guy that walks in and did nothing to win the lottery.

So I tour, and I work hard. We have a restaurant chain, and I have a cannabis company, and soft drinks—Moneybag Sodas—and there’s all kinds of stuff coming that people can’t wrap their heads around. You’re alive, you’re supposed to pump your heart, keep making more money.”

You can read the rest of the article / interview with Gene Simmons at The Wall Street Journal.