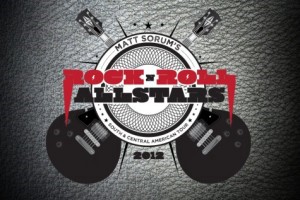 According to www.genesimmons.com, plans were unveiled Thursday at a special afternoon press conference at the legendary Roxy club on Sunset Strip, and the great man with the long tongue was pumped up.

“This is going to be a great time, a time for us to pay tribute to the fans,” Simmons said. “This is an important honor to step on sacred holy ground with a project like this, and all of it is for the fans. It harkens back to the old days of rock and roll, the Legends of Rock when Chuck Berry, Little Richard, all of them got together to put on the best show possible for the fans.”

The only firm dates are 10 scheduled concerts in South America and Central American in places like Brazil, Argentina, Peru, Costa Rica and Columbia, but the plan is to expand with more shows in Europe, then perhaps America, though details have not been finalized. “We’re trying to follow a great trend in rock and roll, and we’re going to have a great time,” Simmons said. “So stay tuned.”

Sorum, one of the main organizers, said the plan is to shuffle musicians, particularly singers, and the plan is for a two-hour show featuring the biggest hits from everyone involved, including Def Leppard’s “Pure Some Sugar on Me” and “Animal,” KISS’ “Rock and Roll All Nite,” Skid Row’s “I Remember You” — Sebastian proved he still has the chops by belting out a few lyrics at the press conference — along with several Guns N’ Roses hits such as “Paradise City” and “Sweet Child O Mine” with Bach singing.

“We’ll play all the biggest hits from each band,” Sorum said. “It’s going to be a good time. The hits will keep coming.”

McKagan conceded that most of players have been around a long time — maybe a little too long for some of them — but that’s a good thing. “If you look at who’s been doing something a long time, if you look at who is still around, they’re usually the best guys to hang with,” McKagan said. “I wasn’t the easiest one to get into the camp, but this is going to be great.”

Hughes plans to sing the Deep Purple classic “Burn,” among others, and the British singer said he is really looking forward to the tour. “It’s going to be quite a spectacle,” Hughes said. “For me, this collective of rockers is a fan’s dream come true. It’s a great lineup with players from a lot of great bands.”

The others involved are singer Ed Roland from Collective Soul, guitarists Steve Stevens from Billy Idol and Billy Duffy from the Cult and bassist Mike Inez from Alice in Chains.