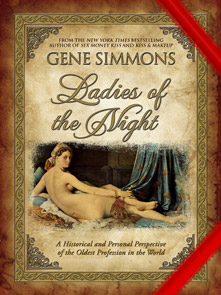 Phoenix Books and Gene Simmons, the New York Times best-selling author, reality TV star, and Kiss front man, present an entertaining mix of narrative history and Simmons’ own unique philosophy about the inception and legacy of prostitution with his enlightening new book, Ladies of the Night, poised to hit bookstores on July 8th, 2008. Beautifully illustrated in lush, velvety binding,Ladies of the Night is an entirely new take on a traditionally taboo topic and promises to spark debate.

In connection with the book’s release, Phoenix Books is giving one lucky fan the chance to win a personalized voice mail greeting from Gene Simmons himself! Contestants are asked to go to www.GeneSimmons.com and reply to the following:

Ladies of the Night–The Oldest Profession in the World: Good or bad? Tell us. And, tell us why.

The essay (200 words or less) and entry form will need to be sent via e-mail to phoenix.books@phoenixnm.com. The contest is open to legal U.S. residents 18 years or older, and the deadline for entering is June 8th, 2008.

On May 6th, 2008, the making of Ladies of the Night was featured on A&E’s Gene Simmons’ Family Jewels, where the legendary rock star and his unconventional family are back and better than ever for season 3 of the hit reality series.

About Gene Simmons:
Gene Simmons is the author of two New York Times best-selling books: Kiss and Makeup and Sex, Money, Kiss. He is a businessman, television star, entrepreneur, and the founder and singer of the rock band Kiss. A constant self-promoter, Simmons is also the star of two reality shows, a&E’s Family Jewels and VH1’s Rock School. He was most recently seen on Donald Trump’s hit television show Celebrity Apprentice.