Five and a half months after seemingly making fun of his long-time KISS bandmate Paul Stanley‘s voice issues, Gene Simmons has apparently publicly righted the ship by stating that Stanley has “the best voice in rock.”

Simmons tweeted the following message on his Twitter account to mark the Starchild‘s 67th birthday on January 20th:

“Happy Birthday to @PaulStanleyLive . The best voice in rock and the best partner you could ever want. Lookin’ good!”

Later during the month of September, Stanley seemingly fired back at Simmons with the following comment in an interview with the Rolling Stone Music Now podcast: “Look… Gene and I have been together, I think, 47 years or something around that. He’s out having a great time. He’s doing these — most of them are free concerts, and when he charges tickets they don’t sell a lot of tickets — and I’m sure he’s trying to keep it light for the couple hundred people or whatever, and that’s great! I was just with Gene, obviously, day before yesterday and we have a bond that is enviable.” 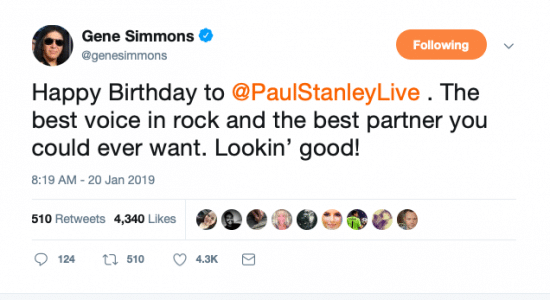