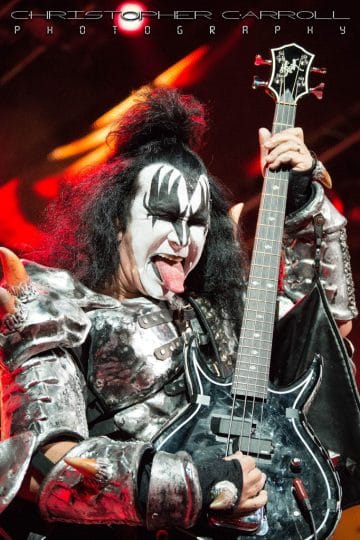 In terms of the state of rock n’ roll today, Stanley opined: “Well, it’s very interesting that the only music that consistently sells out concerts on a large scale is rock and roll. And, quite honestly, if you go to see any of the more current acts, I would say, they’re doing Kiss shows. Kiss DNA is in every entertainment venue that you see. We wrote the book on presentation, and there’s not a band or entertainer out there that I don’t go see and have a little chuckle, and not for any other reason except [realising] we’ve left our mark. I think it was a wake up call to audiences of what’s possible, and that they shouldn’t accept less. So as far as rock and roll being dead, I would bet the farm, so to speak, that Led Zeppelin will outlast anything that has the number one record today.”

Simmons who proclaimed in an interview with Esquire back in 2014 that “Rock is finally dead” indicated: “Rock is dead. And that’s because new bands haven’t taken the time to create glamour, excitement and epic stuff. I mean, Foo Fighters is a terrific band, but that’s a 20-year-old band. So you can go back to 1958 until 1988. That’s 30 years. During that time, we had Elvis, The Beatles, Jimi Hendrix, Rolling Stones, on and on. In disco, you had Madonna, and then you had your hard rock, you had AC/DC, maybe us, a few others. Motown, all that great music. From 1988, until today, that’s more than 30 years. Tell me who the new Beatles is. You can’t. There are popular bands. BTS is very popular. All kinds of bands are very popular. That doesn’t mean iconic and legacy and for all time. It’s different.”

With respect to whether time will tell if some acts are going to be “iconic” in the next 30 years, Simmons stated: “I doubt it. Because the singularity that was the Beatles is a band that wrote their own songs, arranged it themselves, produced it themselves, mostly played all their own instruments. No backing tracks. No digital enhancement. No vocal correctness. Yeah, not gonna happen again. You know, the modern artists rely so much on technology. You may not be able to recognise the artist if they record themselves singing in the shower. You’d be shocked. And none of the rappers play instruments. Don’t write songs. They write words. But chords, melodies, harmonies and stuff. It doesn’t mean that rap isn’t important. It’s very important. But it ain’t the Beatles.”

You can read the rest of the interview with Simmons and Stanley at Gulf News‘ website.