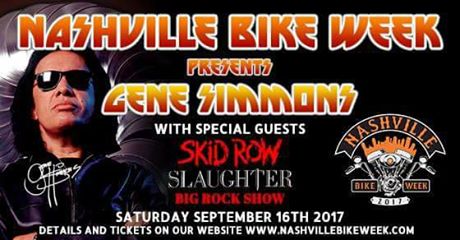 KISS bassist Gene Simmons is stepping away from the confines of his long-time KISS band to headline the Nashville Bike Week on September 16, 2017.

Simmons has played live shows in KISS without Paul Stanley on July 27, 2007 and April 15, 2016 when Stanley was unavailable at the last minute.

It is expected that more solo tour dates from Simmons will be announced in the future.

Message from Gene Simmons posted on Facebook on December 10, 2016: