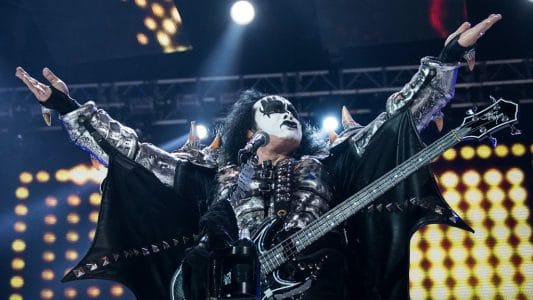 KISS co-founder, bassist and singer Gene Simmons recently reunited on stage with ex-bandmate and guitarist Ace Frehley for a few songs at the CHS Field Stadium in St. Paul, Minnesota, USA on the occasion of The Children Matter benefit concert held to support the victims of Hurricane Harvey on September 20, 2017. This was the first time that the pair were playing live together in 16 years.

This of course sparked the question of whether Frehley would rejoin KISS for another tour of duty. However, Simmons was recently interviewed by The Cassius Morris Show (see video below) and as transcribed by Blabbermouth: “That’s not gonna happen. Ace has been in and out of the band three different times. That’s enough.”

Frehley has remained open to the possibility of rejoining KISS but thinks it will only happen if the money is right for his former KISS bandmates Simmons and Paul Stanley.

Simmons recently announced that his box set of 150 unreleased songs would be sold in three different packages ranging from $2,000 to $50,000.